Son of Promise, Child of Hope

What is it with people on the left? What is this fascination with totalitarianism? The State, emodied by a Great Leader will provide an protect.

And make the rest of us throw up. Dig this cover of a new children's book. 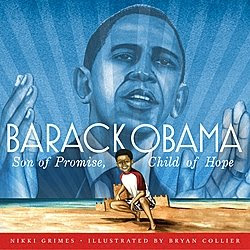 Mein fuhrer!
A while back I was chastised by our Missionary to the Frozen, Northern Wastelands for using a Nazi analogy in a previous post. I deleted it. I'm sorry, but I'm not deleting this one. The government controls 30%+ of the economy through direct spending and a great deal more through unfunded mandates in the form of regulations on our lives and businesses. Obama promises more, more, more! When do you cross the line between living as a free people and living as wards of the State? 50%? 60%? 70%? Combining direct spending with regulation, we're not too far away from that now.

Combine that with drivel like this from the book whose cover is shown above being marketed to children and you get what, if not totalitarianism?

Ever since Barack Obama was young, Hope has lived inside him. From the beaches of Hawaii to the streets of Chicago, from the jungles of Indonesia to the plains of Kenya, he has held on to Hope. Even as a boy, Barack knew he wasn't quite like anybody else, but through his journeys he found the ability to listen to Hope and become what he was meant to be: a bridge to bring people together.

The right is justly criticized for canonizing Ronald Reagan. He was a great president, to be sure, but that was 20 years ago. Get over it. This, however, is today.

Combine all of that above with a willingly hagiographic MSM who sends reporters to sift through dumpsters in Alaska, but doesn't attend Obama's paranoid, racist church or investigate his maniac friends, and you're approach this result.


Whoops! Too late! We've already had the children singing for Obama like he was Kim Jung Il. We're starting to run out of exaggerations to use for parody.

KT, the Hitler/Nazi analogies are just over done. It insulting to everyone who suffered in that war when either side directly compares a politician they don't like to a people who conducted calculated, efficient genocide. I'd have had no problem with making a comparison to PRAVDA or its equivalent.

People on the left say the same thing about the people on the right, that you're saying about them. And if you want to talk about a totalitarian state, this country under a Bush/ Cheney presidency has come closer than any other time in history. Ignoring laws, because they don't want to obey them. Placing sycophants in the Justice department who enforce loyalty tests.

Is the book over the top! Yes, of course. Is it going to twist your children, no because you're not going to get it for them. But in truth it doesn't seem that different than many books about public figures created for young children. They're all full of distortions and positive spin. George Washington and the cherry tree, give me a break. Its all propaganda created to stoke patriotism during the civil war.

I know that Obama's cult of personality bothers you, but the last few two term presidents, Reagan and Clinton specifically, made great use of it, and left office with huge support because of it. Somehow we survived both their presidencies.

As for Obama promising more and more, McCain has recently started matching this pandering. He recently called for the government to buy all the bad debt. Something Obama isn't even trying to push.

And lets take a step back, it isn't the president who has this power, its the congress. I'd worry more about a democratic swing in the next congress than the presidency.

i love the people who insist Bush has trampled the constitution.. give some examples please. And don't tell us that non-americans who are not in america are somehow covered by the US constitution.. or else it's time to demand the swedes expand their welfare state to cover us (for free, of course).

Please do not complain of the enlightened one; his free speech squads are zlready taking note of who will need remedial training after the glorious revolution. You will of course be required to pay for this, out of your tax rebates.

You want the comparisions to PRAVDA? OK, how about this...

If we get a President that seems to have delusions of granduer, a media that simply admits to being used by him without any compuction, and you are on the road to Soviet Union + PRAVDA.

First off, the post needed a story like this one, about ACORN registering a 7-year-old girl to vote. That's vote suppression the same as if they physically prevented you from voting. Your vote, at best, will be cancelled out by people who don't exist or aren't old enough to vote.

There are your brownshirts. ACORN.

As for totalitarianism, it's all about making your decisions for you. Whether that's by taking 30% of the money and spending it or by forcing you through regulations to spend another 20% on things you wouldn't normally buy, that's moving towards totalitarianism.

One more thing for you. The recent financial crisis owes a great deal to a move towards totalitarianism as the government, through Fannie Mae and Freddie Mac, gave mortgage brokers license to lend to unqualified people. The magnitude of that power grab by the government has yet to be seen.

My 10 year old daughter came home from school and said "Guess what Nathan had on his shirt today."

"Hmmm. Would you like me to get you a McCain/Palin shirt?"

"You know what will happen - if you come in in a McCain shirt... They'll ban political shirts."

"Yeah, but it's because they don't want it to turn into a fight."

Now, the teachers in my kid's school have gone out of their way to be respectful, to make sure that everyone of any persuasion is comfortable.

But the kids are intensely interested in this whole thing, and they are wrestling with it all, struggling to make sense of what they are seeing and hearing and feeling from their parents. It goes without saying that the kids largely mirror their parent's choices, and they know it. But they discuss things, pretty respectfully. One conversation was relayed to me in which one kid said to another (my daughter) "Gee, I've never met a Republican before."

Bush Derangement Syndrome is so bad that when the Lion's Club donated beautful new dictionaries to all the kids in the class, the kids would go to the pictures of the President's in the back and draw devil's horns on Bush. It's so bad that one kid in a playground discussion that turned to"How would you like to die?" (Skiing,,, race car driving, in your sleep, all common answers - and one that stood out and disturbed my other daughter - a kid who said he wanted to die being shot by the Secret Service as he tried to kill Bush.) Very HInkley-esque. No? (This was a few years back so don't alert the media. I considered reporting it, and decided to watch that situation, it turned out fine.)

That's why I am so offended by the Obama campaign using kids in this way - the singing video and now the books. It's not just the resemblance to the Hitler youth. It's dragging the kids into this hate-filled Partisan divide.

The kids want answers and honest discussion. they deserve better than propaganda.

KT, the "canonizing" of Reagan has not come close to what we see today with Obama. Especially considering the chasm that separates the two, accomplishment-wise.

I don't know if I'm being desensitized but when I saw a bunch of school children singing hymns about Obama.... Nazi Youth was the very first thing that came to mind.

If these idiot parents are going to use their children to make a political statement then they had better prepare themselves for the inevitable.