I've managed to make my way through about half of Atlas Shrugged. I'm finding myself agreeing with about 2/3 of it. The part that resonates the most with me is the concept that being paid more than the value of what you produce is stealing from others' labor. The story and how it applies to what we're seeing unfold in the economy today makes me unapologetic about my prudiciousness*.

Searching across the blogosphere just for fun, I came across two posts over at The Voyager, the official newspaper of the University of West Florida. The first dealt with the Gen-Y writer's unhappiness about having Boomers bug their generation about playing too many video games, being too fat and too pale. The second dealt with trickle down economics and how the minimum wage needs to be increased.

From the first article:

Finally I realized that it wasn't about the pale skin, the exercise or even the videogames. It never was. That's all just ammunition in an epic power struggle between two generations. Here's what it's really about: hippies-turned-CEOs who refuse to relinquish control.

The bailout plan is targeting the wrong people at the wrong time. The country should have focused on issues like paying better wages to the workers of the country than the previous administration. Then we wouldn't be seeing such reluctance to spend. We wouldn't see American families having to make the choice between feeding their family for the next week or filling prescriptions.

Both articles are animated by the popular culture's separation of behavior and rewards. Health care and higher wages should be handed out because people need it. Boomers control the world because ... well, the author is not sure just why, but they do and she's unhappy with that. Gen-Y should have more control because they want it.

Missing from all of this is the notion that rewards have to be earned. Whether or not the writers believe it, rewards are earned. Someone, somewhere creates the products that are handed out to others in the form of mandated higher wages or mandated benefits. That's the crime we Boomers committed. Budget deficits and the monstrous debts that every country across the world faces are symptoms of the culture we have produced, a culture where self-indulgence is worshipped and the old ways of prudery are scorned.

It's all temporary, of course. No matter what the hippie generation left their children, in the end all of those goodies will have to be paid for. You can't possess anything that someone hasn't produced no matter how much you want it. There are no shortcuts, there is only work and its rewards. The old ways, such as the cardinal virtues described in St. Thomas Aquinas' Summa Theologica, aren't old-fashioned, they simply are. Someone has to live by them that others may consume the fruits of their labor. 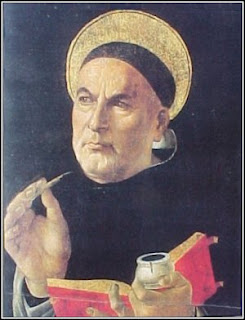 St. Thomas Aquinas. A complete and total buzzkill.
* - Prudiciousness - judicious prudery, a term coined by our Monks of Miscellaneous Musings.
Posted by K T Cat at 5:58 AM

One of the teachers in my kids' Catholic school has a sign saying "Fairness is when everybody gets what they need." I've been biting my tongue... shall I go to her some day and ask if it's fair for me to walk in, take what I need, and leave without contributing?

So they're called "cardinal virtues" because they came from a Cardinal? I never made that connection.

I don't know if St. Thomas Aquinas was a cardinal or not, but I don't think the term comes from the Church office. Here's the definition from Merriam-Webster:

Very nice post and thanks for the hat tip.