The Shape of Things to Come

Now that the government has bought stakes in private banks and since we're already spending Social Security taxes on day-to-day operations as fast as they come in, we might want to consider something like this.

BUENOS AIRES -- Hemmed in by the global financial squeeze and commodities slump, Argentina's leftist government has seemingly found a novel way to find the money to stay afloat: cracking open the piggybank of the nation's private pension system.

The government proposed to nationalize the private pensions, which would provide it with much of the cash it needs to meet debt payments and avoid a second default this decade.

Private pensions, as in your 401(k) with your company, are being siezed by the Argentinian government. But why?

While no one knows for sure what the government would do with the private system, economists said nationalization would let the government raid new pension contributions to cover short-term debts due in coming years.

Oh. That's why. Isn't there something else they could do?

Argentina's financing needs are growing quickly as the global financial squeeze pushes down prices of its commodity exports, such as soybeans. Coupled with unchecked government spending, the commodity downturn has carved a gap of around $10 billion to $11 billion in what Argentina must pay on its debt between now and the end of 2009

Never mind. I didn't realize that they needed the money for important things. (Emphasis mine.) Well, I guess there's nothing to worry about. 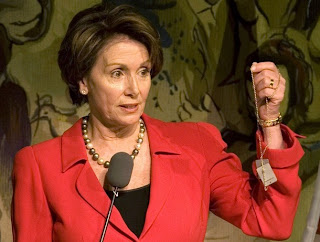 Argentine President Cristina Kirchner. (At least I think that's her. It might be someone else.)
Posted by K T Cat at 9:37 AM

This is Cristina Kirchner. I suppose the person you have a picture of could be her, but I don't think it looks much like her. Maybe it's Argentina's previous female president?

I'm watching the tv news and I just don't get it. Why are corporations laying off thousands of employees. All I can figure is that The Dear Leader's $3,000 bribe for hiring americans only applies to those who have been unemployed for three months. With such a glorious economic future so close under The One, why would any industry be shedding employees. I must be missing something... I must need more Kool Aid (or is that now a racist sentiment?).

KT, I've read impending doom and gloom posts and articles before and my reaction has ranged from mild discomfort to wow, sure stinks for future generations.

This is the first one, though, where I physically gasped and felt queasy after reading it.

If banks can be strong-armed into having to sell shares to the government, what's to stop them from doing what Argentina did?

Off topic: Just notice you changed your sub-heading. Sweet!

Dean, don't get too down in the dumps. Remember, this is Argentina we're talking about. It's not like it could happen here. Right?

I lived in Argentina for 10years. It is more of a disaster than that article describes. As you imply, such a mess is arriving here.