As the debate over universal health care heats up, the question of the day revolves around this - how will we provide coverage to the uninsured people of America? I'd like to suggest that is only a portion of the real question we face.

In Robert Samuelson's excellent book, The Good Life and Its Discontents: The American Dream in the Age of Entitlement, he has a chapter on how the US transformed from a nation that balanced its budget to one that accepted endless deficits. He talks about the corrosive effect this had on society as it gave an example, the largest example possible, of the benefits of living beyond your means. You could have it all, have it forever and never have to save for it or pay for it. We're now about 40 years down that path and we're dealing with the question of how to provide universal health care when the real question is should we provide universal health care.

Morality is simple when there is only one dimension to the problem. That is, if you run over a duckling on an otherwise carless road while driving slow enough to get out of the way, people can ask you with indignity, "Why did you do that?" That's where we are right now. Since we've decoupled having from earning, everything that the underclass needs can be demanded from society at large as there is no other consideration besides need.

However, if you pose the question this way: "Shall we give health care to the poor and further burden our children with debt or shall we try to relieve our children of the debt we have laid upon them and allow the poor to suffer?" the issue becomes much murkier.

Robert Samuelson himself blasts the President's health care plan, but misses his own point.

The one certain consequence of expanding insurance coverage is that it would raise spending. When people have insurance, they use more health services. That's one reason Obama's campaign proposal was estimated to cost $1.2 trillion over a decade (the other reason is that the federal government would pick up some costs now paid by others). Indeed, the higher demand for health care might raise costs across the board, increasing both government spending and private premiums.

If you change the mindset and approach the problem from an earning point of view, the above excerpt looks something like this.

The health care debate is being framed around the wrong choice of words. It's all about costs and how it will raise or lower them as if costs had no connection to anything else in the world. With an existing budget deficit, all of the additional costs will force our children to work harder, longer hours and earn more money so they can pay for what we're trying to buy.

Sitting around discussing this premium or that and how this or that procedure would be covered is a tangent to the real discussion that needs to take place.

How much overtime will the children in our kindergartens and preschools today have to work in order to pay for this? Further: If they will have to pay for our health care, who will pay for theirs? 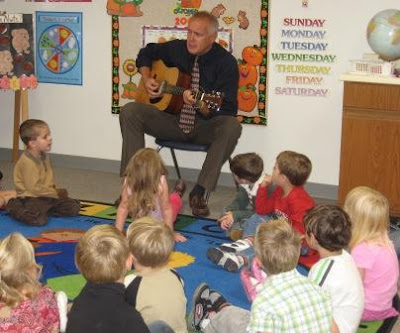 Singing: Working hard is good for you, it's the thing you've got to do! Work harder and harder every day, because our bills you've got to pay!
Posted by K T Cat at 6:10 AM

I don't really like that the whole debate is over "insurance." Insurance is about protecting against potential problems. What the debate has become is about who should pay for the routine.

If we've conceded that nobody should have to pay for routine health care, why should they pay for housing or food? Let's extend food stamps and section 8 housing to families making over $100k/year (a threshold that's thrown around in the medical welfare discussion)?

I think an underlying problem with the cost of healthcare is that all the defensive medicine gets expensive. And the Dear Leader refuses to rein in the lawsuits that make it expensive. He seems to be saying, "I'm going to keep it expensive, but don't worry, since you don't have to pay!"

Another aspect of this that is completely ignored is health care supply. There is much discussion of "healthcare" as if it comes in packages stored in warehouses and if we just came up with more cash, we could consume more of it. WRONG. There are a fixed number of doctors, nurses, hospitals, etc. More money chasing the same goods = INFLATION. The old standby for governments in this kind of situation is RATIONING. Three options here: healthcare costs rise even faster, gov't rations, or a mix of the two. Long term supply can rise, but not if the gov't rations.

Jeff, and the government is going to be forced to ration in order to keep costs down. If the gov't starts implementing price controls on treatments, the health care supply will dry up even quicker.

Dean, the government has already demonstrated that. Look at how many doctors want new Medicare patients...

It’s official. America and the World are now in a GLOBAL PANDEMIC. A World EPIDEMIC with potential catastrophic consequences for ALL of the American people. The first PANDEMIC in 41 years. And WE THE PEOPLE OF THE UNITED STATES will have to face this PANDEMIC with the 37th worst quality of healthcare in the developed World.

Progressive democrats and others should stand firm in their demand for a robust public option for all Americans, with all of the minimum requirements progressive democrats demanded. If congress can not pass a robust public option with at least 51 votes and all robust minimum requirements, congress should immediately move to scrap healthcare reform and demand that President Obama declare a state of NATIONAL HEALTHCARE EMERGENCY! Seizing and replacing all PRIVATE FOR PROFIT health insurance plans with the immediate implementation of National Healthcare for all Americans under the provisions of HR676 (A Single-payer National Healthcare Plan For All).

Coverage can begin immediately through our current medicare system. With immediate expansion through recruitment of displaced workers from the canceled private sector insurance industry. Funding can also begin immediately by substitution of payroll deductions for private insurance plans with payroll deductions for the national healthcare plan. This is what the vast majority of the American people want. And this is what all objective experts unanimously agree would be the best, and most cost effective for the American people and our economy.

In Mexico on average people who received medical care for A-H1N1 (Swine Flu) with in 3 days survived. People who did not receive medical care until 7 days or more died. This has been the same results in the US. But 50 million Americans don’t even have any healthcare coverage. And at least 200 million of you with insurance could not get in to see your private insurance plans doctors in 2 or 3 days, even if your life depended on it. WHICH IT DOES!

Contact congress and your representatives NOW! AND SPREAD THE WORD!