Our Monastery of Miscellaneous Musings has a great post about the unemployment rate shooting way above the Obama Administration's predictions. The key chart is this one. 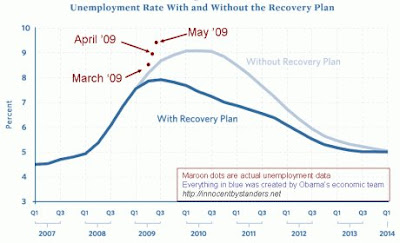 While many correctly suggest that we could have had this kind of unemployment without the $800B price tag, there's a bigger point that is being missed.

The overshoot in the unemployment rate doesn't just show that the Stimuloid Porkgasm™ was a total waste of printed money, it shows that the economic models upon which it and all other macroeconomic decisions are being based is completely wrong. The model isn't even close to predicting reality. It didn't get the slope right, it didn't get the second derivative right, it's missing every metric of curve-fitting you can think of and missing them by a country mile.

In a talk at Google, Mish points out a similar problem with the underlying conventional wisdom that has gotten us to this point. He talks about how the Fed inflated one bubble after another - first the dot com bubble and then the real estate bubble and when each one popped with disastrous results, the economic soothsayers all exclaimed that no one could have seen this coming.

For those of you on the left who claim some kind of prescience, I point you to Barney Frank's and the Congressional Black Caucus' undying defense of the hopelessly bankrupt Fannie Mae and Freddie Mac, both of whom were six-figure jobs factories for retired Democratic political operatives.

In any case, there were those who called these bubbles. Mish and Nouriel Roubini come to mind immediately. It's just that none of them live in the same intellectual world as Paul Krugman, Ben Bernanke, Tim Geithner or Hank Paulson. The folks who are and have been making the macroeconomic decisions live in the world of that graph, minus the real data points.

What the unemployment number shows is that they have no clue at all about how the economy really works.
Posted by K T Cat at 5:41 AM

I think the fundamental problem is that we have two broad classes of people who call themselves "economists": one group is concerned with actually understanding the economy, while the other group is concerned with coming up with economic justifications for the government (and, to some extent, industry) to do the things that they want to do. One guess as to which group gets listened to. The first group has the advantage of being able to say "I told you so!" with a straight face and a clear conscience, but that doesn't put much money in their pockets.

You could also make a case for a third group, who actually have the economic understanding of Group 1, but talk like Group 2. They make economic pronouncements specifically to influence the economy in particular ways that are to their own personal advantage, but not necessarily to anyone else's advantage. I kind of suspect that at least some of the people pumping the bubbles, and proclaiming "Nothing is wrong, everything is going fine!" actually knew exactly what they were doing, took their gains before it popped, and quietly bailed before everything went south. It's just the ones that waited a bit too long to bail that made the big splashes.

Speaking of the employment situation, Junior Achievement just put out a new report about how the country needs a more "Entrepreneurial Workforce" to remain competitive. It's kind of a different way of looking at the problem. Here's the link http://www.ja.org/files/The_Entrepreneurial_Workforce_full-11.pdf.