I wish I had photos to share, but I was busy monitoring the introduction. The results were satisfying and at times hilarious.

First off, Bodie is a 20-30# cocker spaniel mix. He's young and full of joyous energy. Bodie lives with my fiancee and he and our Maximum Leader had never met. 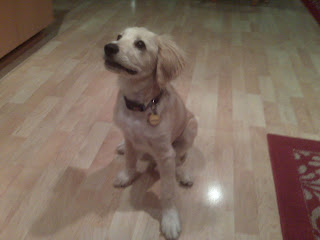 Latin name: bodius spasmodius.
Our Maximum Leader is 14# and about 10 years old. She's not afraid to tell you when she's grumpy. At the sight of Bodie, she got grumpy very quickly.

Our new house is a two-story place and she ran up to the top of the stairs and camped out there. We had closed the doors to the rooms upstairs so she couldn't hide under the beds. From her commanding position on the heights, however, she had a sufficient tactical advantage over the incoherently curious canine. At first he ran halfway up the stairs and barked at her while she growled and hissed. We finally convinced him, through a mix of petting and yelling that there was no need to bark. We convinced her through a mix of petting and treats that her position as Maximum Leader was not threatened.

Over several introductions during the weekend, they gradually grew accustomed to each other. We're now at the stage where he is just mildly curious and she is just mildly enraged. Yesterday, I put out some treats for her at the top of the stairs and Bodie ran up to see what they were and perhaps eat a few. Our Maximum Leader munched them while growling at him. It was a riot. It sounded like this: "Mmmph grrrowwwrrrr nom nom grrrr mmmph grrrrr nom nom grrrrowwwrrr..." At one point she was growling at him, baring her fangs with her mouth full of treat. Bodie got the message and I just laughed until tears ran down my cheeks.

We're debating a proper theocratic name for Bodie. The current favorite, after a suggestion by Kelly the Little Black Dog, is to make him our Captain of the Guards. After all, the Vatican has Swiss Guards, why shouldn't the Catican (thanks, Niall!) have a Cocker Guard?

We haven't decided on his title yet, so if you want to leave a suggestion in the comments, please feel free.
Posted by K T Cat at 6:15 AM

Makes me miss Terry a bit more (tux cat lady we grew up with; died this week).

So glad things are working out alright.