Scientists have recently discovered that the ancient Roman Empire was able to construct an elaborate system of aqueducts and roads without the use of Microsoft PowerPoint or Lean Six Sigma. It is unknown how this was accomplished as these two tools are seen as crucial to all civilization. 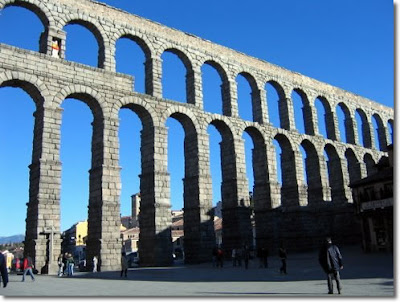 It's possible that this was the creation of interstellar alien visitors that did use MS PowerPoint and LSS.
Posted by K T Cat at 10:49 AM

I'm going to go out on a limb here, and guess that you just had to sit through an interminable, pointless meeting that existed for the sole purpose of making sure that nothing actually got done?

And I'll go even further out on Tim's Limb (poetic, ain't it - be a great name for a bar) and guess that it was off-site.

MS PowerPoint - The bane of all productive organizations.

Ever wonder what business conventions are for?... It's to see how many people a company can operate without.

Lawman, that was a good one. As for today, no there were no meeting to deal with, just some standard bureaucratic frustrations.

The Romans used powerpoint, but it meant something different back then.

That was brilliant, Jeff.