We All Do Our Part

Mark Steyn had a great column the other day defending Kathryn Jean Lopez, a National Review columnist who had been chastised for supporting the war, but not fighting in it. As much as I love the people in the military, I think we can all stop that nonsense right now. Yes, they are the "tip of the spear" and take the risks, but they are not doing it all alone. Allow me to make a simple photographic comparison. 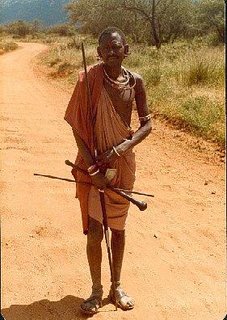 A warrior doing it all alone. 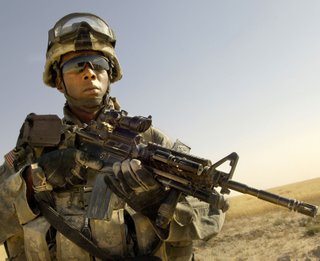 A warrior with the United States' economy supporting him.
The guy repairing cars in a garage in Des Moines and the woman in Nashville homeschooling her kids are just as much a part of this war as the people on the front lines. The ship that took the soldiers over there, the airplanes providing close air support and the vehicles that bring in supplies didn't build themselves.

Masai Warrior photo from this Virtual Tourist site.
Photo of US Army Staff Sgt. Tyvieo Woods taken from this site.
Images used without permission.
Posted by K T Cat at 3:03 AM

That was a great comparison! It is funny but true!