Joe Noori over at No Pasaran has a great post on the use of EU forces to disarm Hezbollah and patrol the border between Israel and Lebanon. For me, this is the money quote:

It’s doomed from (the start), says Poller:
If you don't believe me, ask the EU's foreign policy man, Javier Solana:
"Asked who would disarm Hizbullah—a central demand of Israel—Solana said that the Lebanese could play a role and that he hoped a political end to the conflict would deprive the militant group of its rationale for arms."

So they're not going to actually disarm Hezbollah, they'll just make it so Hezbollah doesn't have a reason to use their weapons.

Given that Hezbollah's reason for existence is the obliteration of Israel and the eradication of all Jews, just what will that look like? 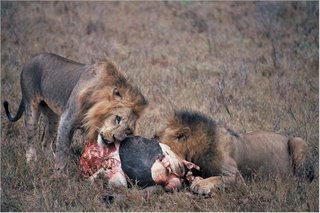 Instead of disarming the lions, the other animals plan to deprive them of their rationale for killing them all. While initial attempts like this one have been unsuccessful, it is hoped that with continued refinements, the killings will become less frequent.
Posted by K T Cat at 6:38 AM