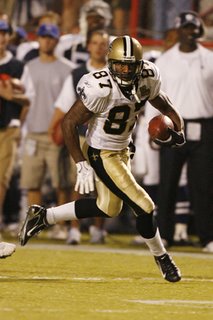 There's all kinds of wailing and gnashing of teeth going on over at SaintsReport over last night's preseason loss to Indianapolis. The message boards are getting posts saying "Brees sucks" and the regional newspapers are fussing about the defense getting carved up by Drew Bledsoe last week and Peyton Manning this week. I was actually heartened by this game.

Unless there's some kind of huge turnaround, the Saints aren't going to be a good football team this year. They could be an adequate one. My bet is that they will win 6-7 games. They need some major improvement on defense before they will be consistently competitive. That being said, the offense is starting to look pretty good, notwithstanding the comments on the message boards.

The Saints had several long drives against the Colts' first string defense. Two of them were ended by interceptions thrown by the obviously rusty Drew Brees. The improvement from last week, though, is huge. Last week they went three and out on their first three drives. This time, Drew went 19-29 for 189 yards. Not a bad outing. The offensive line looked better and both Deuce McAllister and Reggie Bush ran well. If Drew connected for touchdowns instead of interceptions and if John Carney hadn't shanked a 41-yard field goal, the first half score would have been 17-17 and the discussion would be entirely different.

Last week, the offense never got close to the end zone until the end of the first half. This time they almost got there, but couldn't score. Both games were against possible Super Bowl teams. I'm optimistic that the season will at least be interesting.
Posted by K T Cat at 6:20 AM

Nice analysis, I think it's long overdue for someone to point out that New Orleans has a sexy offense but is still a six or seven win team because of the questions on defense. Great point.