I just flew in from Honolulu and boy, are my arms tired!

The trip started out well, but ended with a bit of a wimper. I was there Tuesday afternoon to Friday night. The business portion went exceptionally well, with plenty of great contacts made and my proposals very well received, thanks to my Hawaiian colleague. The weather was predictably wonderful and the hotel was great. I'll post some photos later. (Here's a tease.) 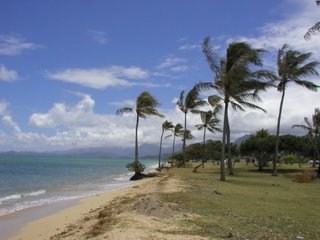 The obligatory Hawaiian beach photo.
Not knowing how things would turn out, I had reservations on the Friday red-eye back to San Diego. It turned out that I had almost all of Friday free, so I decided to scoot over to Kaneohe and then to the North Shore to do some hiking in the botanical gardens on that side of the island and scope out a good snorkeling spot for my next trip.

I drove the H3 from Honolulu to Kaneohe. The H3 cuts through the mountain range on Oahu and there's a part where the highway comes over the crest of a big hill and slopes down the other side. It was a great place for a speed trap.

I was last in a line of cars all doing 70 coming down the hill on a freeway with a speed limit of 55. Since I was the last one, I was the one singled out by the cop with the radar gun positioned at the base of the hill aiming at cars who had come over the crest and were picking up speed coming down the hill.

One $142 ticket later, I was free to go, thank you very much officer. I tried to stop by the courthouse to see what my options were, but it was closed. Oh well.

I ended up wandering around on that side of the island for the rest of the day, but got to the airport way too early and then didn't sleep more than 15 minutes on the red-eye back to the mainland. I did manage to find some good snorkeling spots and did a little beach walking and wandered around one of the gardens. I've got a great plan for my next business trip over there.

This time, instead of the normal photos of beaches and jungles, I decided to get some shots of the port of Honolulu. I got some pretty cool shots of fishing boats and the harbor tugs. I'll post them later, once I get some sleep.
Posted by K T Cat at 3:22 PM

Are you sure that bird was not photoshoppped before you took its picture? Looks a lot like the head of the State Bird of West Virginia . . . .

Where do the interstates in HI go, anyhow???

Don't get mad at my questions, I am just envious of your "business trip

Thanks for stopping by and leaving a comment! I could never figure out the Interstate in Hawaii, either. I think it has more to do with where the funding came from than its end points. I'm sure those were Federal dollars that built them.

As for the cardinal, I agree. Even in person they look Photoshopped.

Come back and leave a comment any time. You are always welcome here.

Here's a list of 13 books my human never finished reading: