Many of my blogging friends have made all kinds of disparaging remarks about the photos that were, er, modified by Reuters and the woman from Beirut who shows up lamenting multiple houses. This criticism is way out of line.

The Lebanese woman is a particularly egregious example. The text under her photos suggest that she is lamenting the loss of her house in two different places. Critics suggest that this cannot be true; she cannot have had two houses. They miss the point. She didn't own the houses, she insured the houses. 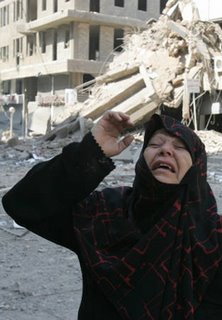 Do you have any idea of the amount of paperwork I'm going to have to go through now? 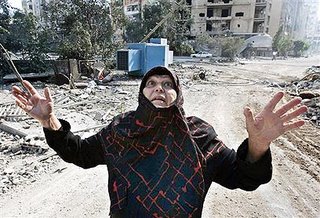 How in the world could we have foreseen this? Now there's no way our rates will be able to stay competitive with Farmer's and Allstate!
I hope that clears this up.

Update: Our Prelate to the Primates celebrates too soon. Our Vicar of Victory begins what may be a long string of apologies. Angel makes a rare mistake.
Posted by K T Cat at 5:40 AM

I just saved a ton of money on my car insurance by switching to Geico!