Running for the Exits in China

Today's Wall Street Journal reports that the Chinese stock market dropped 8.8% yesterday. That's the equivalent of a 1100 point drop here in the Dow. The claim is that this was just profit-taking.

Chinese share prices, after years in the doldrums, have soared for most of the last 20 months -- a rally that has prompted millions of Chinese to take up stock trading. Officials have expressed concern about the pace of the runup, after the benchmark index surged 130% in 2006.

130%?!? That's insane. An entire stock market going up 130% in a year? It's not possible for there to be a financial basis for that. The Chinese economy is growing at about 8-10%. This just sounds like wild speculation to me. How much can you trust the balance sheets of the companies in China? How strong are their accounting laws? I don't blame people for getting closer to the exits or just taking their money and running right now. 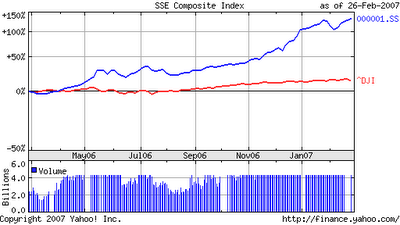 A 1-year chart of the Shanghai Composite (SSEC) vs. the Dow. The Dow has had a great year, but it shows up as barely a blip compared to the frantic run-up of the SSEC. Anything that goes up that fast can come down even faster.
Posted by K T Cat at 4:52 AM