Welcome to another World of Good (WOG) blogburst here at The Scratching Post. Sometimes you go to a WOG and sometimes the WOG comes to you. We were doing research for future WOGs when this one fell into our laps. Well, emailed into our laptops, but you get the picture.

Jim Hake doesn't know this, but he is one of my heroes. He is a businessman who is using his connections and experience to do kind things for the people living in war zones. I got on his email list at the beginning and have watched his progress with pleasure.

After Operation Iraqi Freedom transitioned from open warfare to helping the Iraqi people create a stable, functioning democracy, he saw that a key to their success would be the creation of Iraqi media outlets to compete with the pro-terrorist Al Jazeera. Using his business acumen and marketing connections, Mr. Hake began a charitable organization for the purpose of equipping Iraqi TV and radio stations. It was a great success.

From there, they received support and participation from a wide range of businesses, schools and individuals. The size and scope of their good work has expanded with each month. 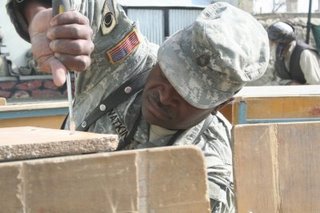 After years of conflict, much of the infrastructure of Afghanistan was destroyed. Here, American soldiers repair desks to rebuild a school. 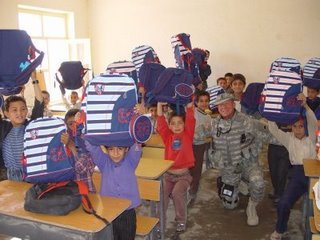 School supplies and backpacks were given to children in Afghanistan. Sadly, this was followed immediately by a pop quiz. 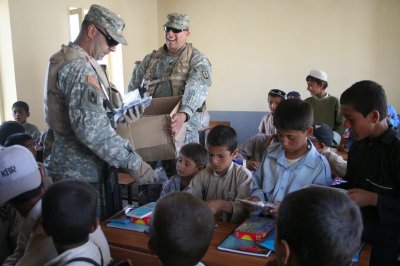 Dental hygeine makes a big difference, but sometimes the simplest of tools are not available. Here, dental care kits are handed out to Afghani children. "Thank you, Mr. Nice American Soldier, sir! Now I have no excuse for not flossing!" 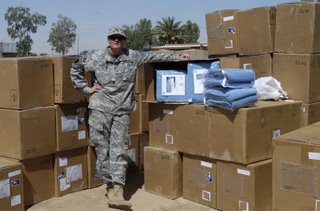 Blankets sold to Spirit of America at a deep discount by Springs Industries which makes Martex, Springmaid and Wamsutta are distributed in Iraq. 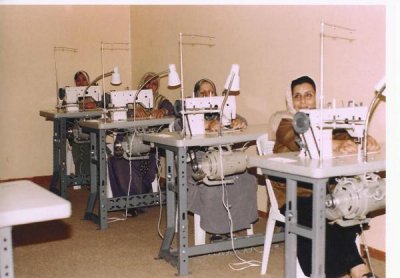 This is my all-time, grand national champion favorite story. Spirit of America helped set up women's sewing centers so Iraqi women could go into business and make money for themselves. Self-reliance is the best!
Do the soldiers and marines who are there think it’s making a difference? Judge for yourself.

LtCol David Couvillon says, “They say there aren’t any ‘silver bullets’ for improving things in Iraq. I don’t know. Spirit of America just might be a silver bullet.” And, Major General James Mattis of the Marines says, “the initiative and focused support provided by Spirit of America is beyond anything we have experienced.”

If you haven’t seen the news, Al Qaeda has recently set up shop in Somalia. As if those poor souls didn’t have enough trouble already. With the help of the military, Jim Hake and his team are now looking for assistance to help the people across the Horn of Africa find a better way of life and resist the terrorists.

Check out their blog post about this. Maybe you can help, too.

Finally, if you want to read a story that will just blow your mind, check this out.

The definition and purpose of our WOGs is given here, along with a list of all previous WOGs. There have been many WOGs and I'll bet if check it out you'll find a subject of interest to you.
Posted by K T Cat at 7:38 PM