I just finished reading, or at least thumbing through the majority of, Napolean Hill's Think and Grow Rich. If you look at recommended reading lists for business, this title is almost always there. Back in the day, Mr. Hill was commissioned by Andrew Carnegie to find out what successful people had in common. One of the things he found out was that they had an almost monomaniacal focus on a single goal. They picked a subject and excelled at it.

Last week I got a first-hand demonstration of how and why that works. I was asked to sit on a panel that determined which three to five of twenty science and technology proposals would be funded for next year. Our own organization had a proposal in the mix and so did those of some of the other panelists.

Our proposal was very well received and scored well. It placed fourth out of twenty and five projects ended up getting funded. Ours was not one of them. The problem was that the first and second place proposals were in the same topic area and were clearly superior.

The winners had focused on the subject, in this case, laser communications. While all of the presentations were technically sound, the others referred repeatedly to other work they were doing with lasers. We were more generalists and our resume was old and nearly out of date.

Napolean Hill's research indicated that people who pick a topic and focus on it succeed more often than those who don't. Success builds upon itself. With every project you do, you gain more skill and make more connections with others in the field. The more skill and connections you have, the more proposals you win. Soon you have a national reputation and win proposals based on your name alone.

This graph shows the concept. 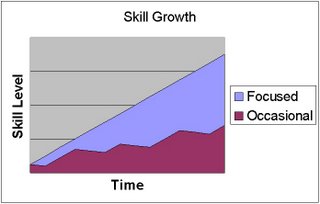 People who focus on a subject continually improve. Dabblers improve when they work in the area, but their skills atrophy when they don't. As time goes on, they fall behind and simply cannot compete with those who have focused.