Tripped Up by Baggy Pants

Lawman, I'd love to see your comments on this one!

There's a hilarious article by Serena Ng in today's Wall Street Journal on young criminals getting tripped up by their baggy pants. Here are some of my favorite sections:

Just about every other week, Jim Matheny, a 41-year-old police lieutenant in Stamford, Conn., says he gets into foot chases with youths. He says it's getting easier to capture them because they can't run fast or far in those loose jeans.

"When I catch them, I tell them they'd do much better if they had pants that fit," says Lt. Matheny, who says he has had to help hold up the pants of his suspects while patting them down to search for drugs or weapons. "It's like: 'Hey dude, buy a belt and save yourself some trouble.' "

Ill-fitting pants aren't suited for jumping, either, as Noah Donell Brown of Hendersonville, N.C., learned. The 24-year-old tried to leap over the counter of a Subway sandwich shop during a robbery attempt, but he stumbled and came crashing down in front of several startled store employees. Mr. Brown, armed with a gun, got up and fled into a nearby residential neighborhood as the police were notified.

Police didn't have to work hard to arrest him. As Mr. Brown tried to scale a picket fence in someone's backyard, he caught his pants, according to the police department. He was found dangling upside down, his pants at his ankles and tangled in the fence. 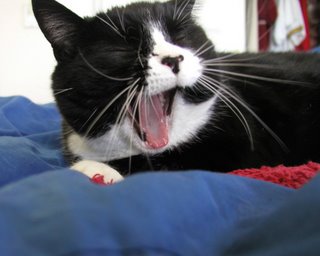 Stop it, Serena! You're killing me!

LOL yeah. These knuckleheads sure make my job easier. I've had similar cases where the suspect probably would have outrun me if he wasn't so busy trying to keep his pants up. One guy tripped up and stumbled around so much I was laughing so hard I almost couldn't get the cuffs on him. We ended up charging him with public indecency as well since there were about 20 residents who witnessed him stumbling down the street with his underwear showing.

I'm not complaining though. I'll take whatever legal advantage I can get when trying to get a criminal off the streets. Even if it's the suspect wearing pants 5 sizes too large with no belt. :-)