How Does This Not End In Secession?

Here's a "thought experiment" from a left-wing, British journalist. 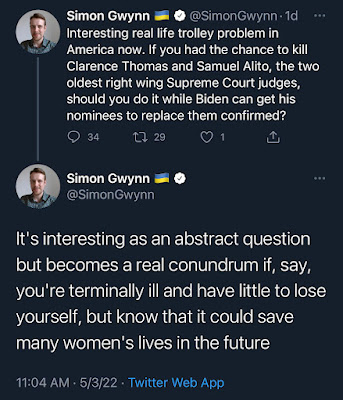 Suppose that happens. Then what? If you're a pro-life conservative or just someone who would like to live in a democracy with stable laws and law enforcement, what choice do you have but secession? Political violence, like the original Roe decision itself, is designed to make elections pointless. If the other side wins, then the solution is to kill their elected officials and appointees. Obergfell, the decision that legalized gay marriage, was exactly the same thing. No voting for you, peasants! You have the wrong opinions!

If political lunatics murder their way to achieving their goals, the logic of secession becomes inescapable. You're left with stark choices: submit to the radicals' demands, engage in violence of your own, or peacefully leave. As rabid as the online political discussions get, I can't see anything near a plurality of people opting for fighting in the streets.

As a reminder, secession will not be done at the state level. Once it gets going, those red counties in states like Oregon and California aren't going to want to stick around. If secession is catalyzed by political violence, then it wouldn't be surprising for secessionists in those rural counties to revert to force of arms to break free. If you think their sheriffs are going to enforce blue demands once the shooting starts, think again.

Justice Alito has canceled a public appearance out of fear of violence.

U.S. Supreme Court Justice Samuel Alito pulled out of a public appearance Thursday in the wake of the unprecedented leak of his draft majority decision in a case that could reverse the landmark Roe v. Wade case which declared a Constitutional right to abortion.

Alito was to take part in a  judicial conference set to begin on Thursday in Nashville, Tennessee. Supreme Court spokeswoman Patricia McCabe did not say why Alito canceled when asked by Reuters, but an investigation into the leak is ongoing and some leftists have called for protests and even violence against the five justices who signed onto Alito’s draft opinion.

All of this to prevent people in different states from voting to enact their own laws regarding abortion. Amazing.

And Now, Something To Make You Cry

People literally talk about losing their babies all the time. My friend lost a child in 3rd trimester and was so devastated that she had the footprints of the dead child tattooed on top of her feet. They've made art about it. Brick - by Ben Folds 5 and this come to mind... pic.twitter.com/r5RfzkKu26

My mother had a miscarriage of twins between me and my brother, and I can assure you that she mourned for those babies ... and never really forgave my grandmother, her MIL. for flushing them down the toilet without letting her even see them. She later gave birth to my twin sisters, and their births were a comfort to her.

How is that lefties tweet anything but hate speech? In-sighting violence?

I can't not understand the hypocrisy and arrogence of the left.

Everyday, in every way, the left is pushing me further and further right.

Ilion, that's a very powerful story. I'm happy you Mother got a little peace with your sisters.