Just some odds and ends thoughts about the chaos du jour and a few other things.

When Is Verdict Vote Permanent?

When the SCOTUS opinion on Roe got leaked, the first thing I thought was that it was a call for a political assassination. If someone bumped off, say, Clarence Thomas, then Biden would get to name his replacement. Would Thomas' vote on the initial consensus count?

I liked the fact that CNN got another leak letting everyone know that Roberts was cool with the whole abortion thing, even if he supported the Mississippi law in question. That would narrow down the potential victims, allowing would-be goons to concentrate on the right ones.

Anyway, overturning Roe just means we get to vote on the thing at the state level. Why are the Progs so against us voting?

My mentions have tripled and my follows are going up, too, since Elon bought Twitter even though he hasn't taken control yet. I never doubted that I was being suppressed. It's gratifying to see what things should have been like all along.

A Ministry Of Truth?

It's ludicrous. I don't know what they're smoking in DC, but the whole concept that government officials, all of whom are overseen by politicians, are in any position to let us know what is and what isn't disinformation is hilarious.

Or it would be hilarious if we still had any comics left.

They're as bad as you think. Source. 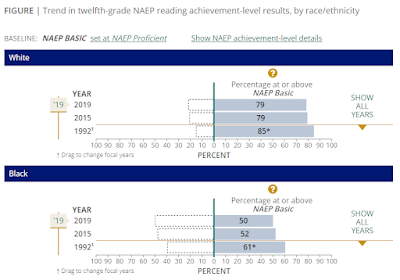 Half of all black 12th graders read below the basic level. They are effectively illiterate. Here's what basic level means.

Geezey Moe. Not only are the results horrible, but they're getting progressively worse.

Meanwhile, per-pupil spending has gone up and up and up. I wonder if it might be time for us to try something other than pouring money on our schools. Maybe we could look into family structures or something like that.

I'm very upset about the leak. The source needs to be fired and career ended. Assuming the person who leaked is not a Justice, we can hope that their law career is ended. Unfortunately, that person will probably get a high level job in the Political party of whichever side they lean toward.

This is the final nail in the coffin of the Supreme Court being above politics. No longer does it interpret the Constitution.

MN- Actually if you read the "leaked" (draft) decision, they are very clear that they are basing the opinion upon the Constitution. The two money quotes for that are:

" The Constitution makes no reference to abortion, and no such right is implicitly protected by any constitutional provision, including the one on which the defenders of Roe and Casey now chiefly rely — the Due Process Clause of the Fourteenth Amendment."

"It is time to heed the Constitution and return the issue of abortion to the people's elected representatives."

Now as to being 'above politics', the lie was put to that long long ago. Assuming they identify the leaker, I would bet LOTS that it will be someone who did so for political reasons.

I guess I was unclear. I wasn't referring to the draft. The decision is ultimately unimportant.

The big issue here is that there was a leak. It has to be investigated and the fall guy who did the leak needs to be fired.

==This is the final nail in the coffin of the Supreme Court being above politics. No longer does it interpret the Constitution.==

It was never the job, nor the authority, of the supreme Court (*) to interpret the Constitution, but rather only to apply it. All of the mischief that the federal courts have done over the years is rooted in that word, 'interpret'.


(*) Notice the capitalization, as per the Constitution. It matters.

And, which I would say is even more important, term limits on the bureaucrats in the civil service.