When Jesus Puts You Out Of A Job

... the only thing you can do is ditch the Jesus stuff.

Wallace's speech surprised me in that it didn't support racism so much as it did racial purity. It had a very Hitlerian quality in that way. Wallace didn't want to enslave the blacks, he just wanted them over there while the whites stayed over here.

And so it was meant in our racial lives . . . each race, within its own framework has the freedom to teach . . to instruct . . to develop . . to ask for and receive deserved help from others of separate racial stations. This is the great freedom of our American founding fathers . . . but if we amalgamate into the one unit as advocated by the communist philosophers . . . then the enrichment of our lives . . . the freedom for our development . . . is gone forever. We become, therefore, a mongrel unit of one under a single all powerful government . . . and we stand for everything . . . and for nothing.

Emphasis mine. The problem with mongrels is that they can't be de-mongreled*. My own family is pretty well-mongreled. In our children's generation, I think we have every race represented when you include spouses. When you include grandchildren, mongrels abound. Wallace's vision for racial purity is completely out the window.

The dude's going to have to find another job.

Dittos for our modern race maniacs like Ibram Kendi and Robin DeAngelo. It's kind of hard to scream about whiteness when a bunch of the whites are also partially black. That's why LeBron James' boy took so much heat.

LeBron James' 17-year-old son Bronny is trolled with vile racist abuse for taking a white girl to his high school prom after sharing photos of the couple...

Bronny, who is a junior, attended the dance with one of his Sierra Canyon School classmates, senior Peyton Gelfuso...

Some social media users were not happy with his decision to take someone who is 'light skinned' to prom; one person called Peyton a 'money hungry white girl' while another accused her of being a 'gold digger'

The Jews and then Christ told us to chill out about the racial stuff. We're all made in the image of God and there are no Jews nor Greeks, dudes and dudettes. Just be cool, man. If He and His Dad are really the creators of Heaven and Earth, they get the last say in what is right and what is wrong. If mongrels are OK with Them, then mongrels are, by definition, no big deal.

If mongrels are OK, then your pedigree is nothing more than a piece of paper. At that point, it's kind of hard to get a fat check for writing books and giving speeches against mongrelization.

Yesterday, I suggested that since guns aren't easier to get and gun technology hasn't changed, then the increase in shootings must be due to cultural changes. I suggested an increase in nihilism.

Nihilism - the rejection of all religious and moral principles, in the belief that life is meaningless.

Upon further reflection, I'll double down on that bet. Sending $40B to support the corrupt kleptocrats in Ukraine while our own border is totally undefended seems pretty nihilistic. Dittos for not using SAT scores for college admissions so you can claim you're fighting for racial justice. I'd say demanding more money for schools when it's clear that family structures dominate outcomes is pretty nihilistic.

That last one is changing a bit as both the NAACP and the Baltimore Teacher's Union are now asking for stricter punishments for classroom violence. One point for the good guys, there.

How about handing out needles to drug addicts and giving them safe places to shoot up? Nihilistic? Yes. Or this poster seen on NYC subways? 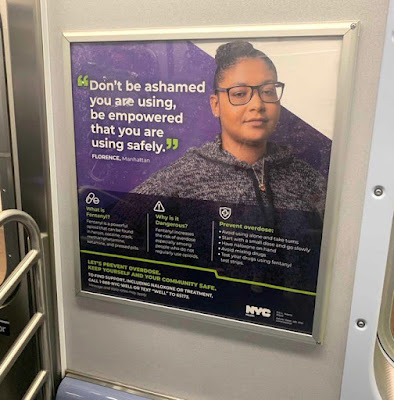 I'm using up material for future posts, so I'll stop here. All of that sure looks like we've discarded the concepts of objective morality that come along with Christianity. On the plus side, Kendi's getting $20,000 per speech, so there's that.

* - Is it de-mongreled or de-mongrelled? I went with one "l" because it looked right.