An Executive Board Meeting For The Ages At State Farm

I'm here to tell you that I would pay good money, maybe in the 4-figure range, to see a video recording of the recent executive board meeting at State Farm* when the non-insane members of the board found out about this.

🚨 Emails leaked to @ConsumersFirst from concerned @StateFarm employees show the company engaged in the woke indoctrination of kids age 5+.

State Farm partnered with The GenderCool Project — which aims to have conversations with children about being Transgender and Non-Binary. pic.twitter.com/MYcZSW8Yp1

Ohioan and I experienced many exec board meetings and they were almost all tedious affairs. I can just imagine how this one went. The room was filled with the kind of people who make it to leadership positions in an insurance company - somewhat overweight, bland, but competent managers wearing Brooks Brothers-quality suits. Once a week, they sit through a two-hour meeting where young climbers give them PowerPoint presentations that could tranquilize a honey badger.

The biggest goal for the attendees is to not ask so many questions that the meeting goes long and they get home late, missing Junior's baseball game or Missy's soccer practice. The second biggest goal is to stay awake. I think it went something like this.

Bob from Finance: ... and, as you can see from the chart, the dashed line is the amortization rate as a function of month of our municipal bond investments while the dotted line is the return on our large-cap mutual fund and the dot-dash line is our ...

Here, Bob drones on and on and on until he's mercifully cut short by the admin who is running the meeting and trying to keep things on time.

Admin: Now we'll finish the meeting with a report from our Chief Diversity Officer, Victor Terry.

Victor: I'm happy to report that our recent effort to distribute books encouraging five-year-olds to ask their parents for chemical castration and bodily mutilation is proceeding nicely! Why, just this week, we distributed over two hundred GenderCool books to local grade schools.

Joan from Accounting: Wait, what?

Victor: It's been a big success!

Victor: Our effort to poison children with wrong-sex hormones and hack off their breasts and genitals!

Jack from Marketing and Sales: Do you mean to tell me that State Farm is on the record as spreading sexual degeneracy to kindergarteners?

Jack: How does this help us sell and service insurance?

At this point, Jack's assistant comes in and hands him an email from one of his regional sales manager telling him that customers are losing their minds over this and canceling their policies. Since Jack's annual bonus and the bonuses of his team are tied to State Farm's number of active policies, Jack and his team have just seen millions and millions of their own dollars evaporate like water on the asphalt of a Phoenix parking lot in August.

With a roar, Jack leaps across the meeting room tables and grabs Victor. It takes three strong men to pry Jack's hands from around Victor's throat. The entire meeting devolves into screaming and rage.

Victor and his diversity team might want to polish their resumes right about now. 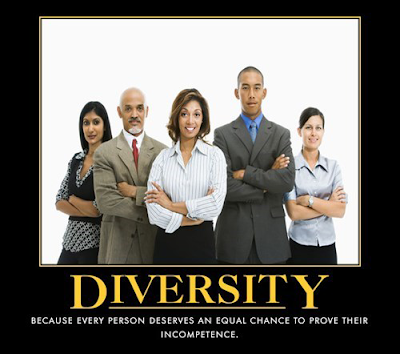 * - I originally wrote this post talking about Allstate because I got Allstate and State Farm confused. I still don't know which is which or if there's any substantial difference between them.