If Things Keep Going This Way

... is a common fallacy among us Cassandras. Here's an example.

As night is falling, we might say, "If things keep going this way, we can expect all of our plants to die! Without the sun, they cannot survive! We need more money for research."

I added that last part because I thought it was funny. Your mileage may vary.

Societies can learn from mistakes and that's a good thing. Dig this.

Americans are more likely than they were three years ago to say single women raising children on their own and couples living together without being married are bad for society, according to a Pew Research Center survey conducted in October 2021...

Some 47% of U.S. adults say single women raising children on their own is generally a bad thing for society, an increase of 7 percentage points from the 40% who said the same in a 2018 Center survey. A smaller share (43%) says it doesn’t make a difference, and just 10% of adults say it is good for society.

Here's the chart accompanying the article. 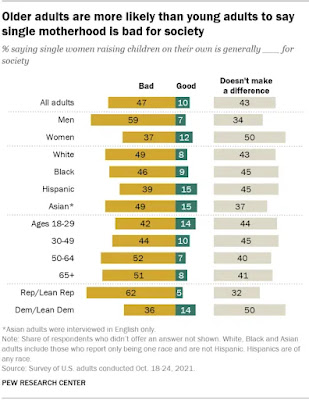 At first, it seems odd that women are the most likely to say that single motherhood is no big deal. After thinking about it, I'd suggest that there are two primary reasons for this.

Let me suggest a third, and *the* primary reason --

3) Most modern American women -- even those who say, "I'm not a feminist!" -- have fallen for, and have lived their lives in accordance with, the lies of feminism.

The point is: to *acknowledge* that "single motherhood" is not good for society, nor for children, nor for the women themselves, would be to implicitly acknowledge that *they* have done willingly harm to their children, and to themselves, and to society at large.

And if there is one thing that no one, least of all women, wishes to acknowledge in Current Year America, it is that women are as great sinners as men.