On Twitter, many people who I used to think were stable and wise are posting videos and anecdotes showing evidence, such as it is, of election fraud. There's piles of it out there and it's impossible to sift through or judge. Scott Adams debunked one of them, but it doesn't matter whether he did or not. As I replied to him,

It doesn't matter what is real because none of us can trust anyone who is trying to tell us what is real. In the grand experiment of life, almost the only data we can trust these days is our own, personal data. This is a consequence of having an utterly corrupt news media.

When I saw one of the videos showing fraud, I couldn't tell where or when it was made, what it was really showing or what any of it meant. In the end, the only thing I can trust is what I observe myself. I'll give credence to a handful of others, but they'd have to be direct acquaintances.

This is no way to live, but it's where we are right now.

From there, let's jump to pondering a split or civil war. I spent some time perusing military analyses of the topic, but I didn't see anything I liked. Most everyone split the sides at the state level, but that's nonsense as my Oregon Secession Map showed. 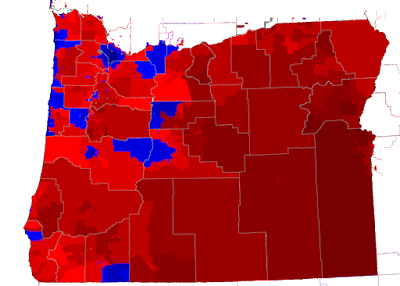 Others split the sides by cities or counties and then proceeded to work out the GDP of the two sides. "Ha ha!" they cried. "The Blues are so rich!" That only works if you last long enough to get a couple of paychecks. In reality, the Blue cities would be cut off and brought to their knees almost immediately.

Then there came talk of the US Army intervening. "Bah. An insurgency would be put down immediately. A few cruise missiles and it would all be over." Really? Where? I took a look at Army combat units and where they're located. There's only one, the 10th Mountain Division, located in upstate New York on the Canadian border, for all of New England. That's Boston, New York, Albany, Passaic, Philly and on and on and on.

The truth of the matter is that the Army has nothing like the kind of infantry strength necessary to control even a tenth of the country, much less random popup hotspots.

The entire Pacific Northwest is similar. There's only a single division up near Tacoma.

Then we come to the cities themselves. As far as I could see, there are lots of looters, but not many dedicated ANTIFA / BLM militiamen and militiawomxn. When you watch the Portland riots these days, the loons are lucky if they can muster 50 people. It's really pretty pathetic. Get a good looting started and you'll see hundreds, but looting is bad for the Blues.

How about the cops? The sheriffs aren't cooperating with the Blues in enforcing lockdowns and the city cops have bailed out. If things get dicey in the cities because they're running low on supplies, the looters will have a field day.

So what is this? It's not a civil war because there's not really two sides who can fight. Instead, it would be more of a self-inflicted scorched earth campaign by the Blue cities. Recall that a scorched earth campaign is where a retreating army destroys all of the supplies it can't carry so that the enemy cannot resupply by foraging.

Here, the Blues wouldn't be able to resupply through transportation. The end result is the same, a completely unsustainable campaign. In fact, the campaign could be carried out with a simple trucker strike and a couple of power lines knocked out. No need for massive bloodshed.

I have no idea what the outcome would be because I don't think there are coherent demands on either side except maybe the Reds asking to be let alone.

Further thought experiment: Are Gavin "Goober" Newsom's hollow proclamations a foretaste of it? Is Irish Democracy, where leaders make pronouncements that no one follows, a better model?

Having said that, things might get a little dicey if the Democrats follow up on their idea to forgive all student loans. That's Boston Tea Party material right there. Truckers and plumbers paying for rich kids' private schooling? Maybe. Maybe not.

"I have no idea what the outcome would be because I don't think there are coherent demands on either side except maybe the Reds asking to be let alone."

That's exactly the problem I have with understanding what a "civil war" would be like, or why one would start. It is not clear exactly what any of the plausible participants would actually want, or how they think fighting would help them get it. And to be fair, I am not really seeing a lot of sentiment around here for actually fighting with anyone.

Like up here in the UP, for example. Supposedly the UP is "crawling with militias" (but only if by "militia" you mean, "bunch of guys who like to get together to target-shoot and maybe gripe about the government). But so what if it is? Nobody is invading. Heck, hardly anybody even wants to live here in the first place, let alone invade. And if they did invade, what would they get for their trouble? Lumber? Iron ore? Bits of native copper? Snow?

And going the other way, it's an 8-hour drive from here to Lansing, even assuming the roads are clear and nobody is trying to stop you. And out of the 10 million people in Michigan, about 9.5 million of them live south of Bay City, which is still a 7-hour drive. So who the heck are they going to engage in combat with? And over what?

Now, I can see the possibility of specific cities being mismanaged so badly that all the police just throw up their hands in disgust and quit, and roving gangs tearing the place apart until they get reorganized. But I don't see why it should happen to more than a few cities. And I really can't see why any rural people would care to go to the cities to participate in this. I mean, what would be the point?

I wonder if a flash point might be the businesspeople who have been whiplashed and bankrupted by lockdown decrees. I've seen enough of them ranting and raving to wonder if they might be pushed too far. Throw in a disputed election and some Kamala overreach and who knows.

In any case, I think I've concluded that a band of 30 or so anti-ANTIFAns operating from the perimeter of Portland could do way more damage in a week than what the loons have done in four months.

One more thought. Our Army bases are almost all in red states and then in the red regions of the red states. Unlike the leadup to the Civil War where soldiers stationed outside the nation of their allegiance took their weapons with them and headed home, a Blue tanker at, say, Fort Hood, wouldn't be taking their Abrams home to Laguna Nigel with them. They'd leave with the clothes on their backs and that's all.

As you say, though, it's far more of a thought exercise than anything else.

The two areas need each other.