Well, like the tobacco experiment of last year, this year's cotton experiment is being closed out without an end product. It was highly educational, but I lack the time and resources to make completing it worthwhile.

When last we left our hero, he was struggling with making a cotton gin according to a YouTube video he had seen. The video claimed that you could make a gin by pressing two wooden cylinders together and counterrotating them. The lint would be pulled through to the other side with the seed pinched out of it.

That was nonsense. A cotton gin is nothing of the sort. While the time spent discovering how to make gears in a garage shop with relatively crude tools was valuable, the end result was never going to work. A real cotton gin is a rotating cylinder with metal teeth in rows. The teeth grab the lint and pull it through very narrow slits in a metal comb. The seeds are too large to go through the comb and thus the lint is separated from the seeds. Using wooden rollers to pinch out the seeds is for unlettered savages.

I took photos and videos of my efforts yesterday which will show you how the idea was utterly futile.

Using strips from an automotive timing belt glued to lathed ends of wooden rollers worked well as gears. I didn't mill them down enough, so gaps still showed up in the rollers, but the concept was correct. If I had chosen to keep going with this experiment, I'd return to my new woodworking friend and have the rollers refined.

You can see from that video that the gears work, but the rollers separate as they rotate. Oh well. It was never going to work anyway.

Pinching Out The Seeds

This is a fool's errand. The wooden rollers lack the friction necessary to really grab the lint. Once they do, if any gap forms between them, part of the seed will sneak in and then get crushed into seed shrapnel by the rollers, ruining that particular piece of lint.

Photos Of Success, Such As It Was

I was able to remove a couple of seeds from my lint using the faux gin, but to do so, I first had to separate the lint until there were only one or two seeds left in it. As the normal boll cell had five or more apiece, this meant I was doing all of the work of seeding the stuff by hand except the very last part.

How A Real Cotton Gin Works

Unlike those of us who get taken in by fast-talking social media slickers on YouTube, wise cotton farmers process their bolls as shown in the video below.

The truth of the matter is that I simply don't have the time or the gear necessary to take this to a successful conclusion. I could make a working gin, but after that, I'd have to make a functional spinning wheel and the futile gin exercise has shown me that a spinning wheel would take more precise tools than I possess. As we want to move soon, there's no point in adding new equipment to my pile. Once we find a place with a bigger lot, I'll have a workshop that can handle it. Buying things now only to have to pack and move them later would be silly.

Secondly, I don't have the time to complete the job. I'm still working full time and I've got a couple of days work ahead of me to finish off my MGB project. Finding the time to do that will be hard enough without adding in the construction of a real cotton gin and spinning wheel. Once I finish the car, I'll be able to pack up the electrical wires, connectors and tools for moving and tidy up the garage.

Like the tobacco experiment, this was a good deal of fun. Once we have an acre or so, I'll build bigger raised beds and plant more cotton and more tobacco. With a decent workshop, I'll be able to build a proper cotton gin and a spinning wheel as well. I'd like to take both of these efforts to a successful completion. These first attempts were very educational. I'm pretty sure I'll only need one more attempt to get a finished product out the door.

Eli Whitney Was A Jerk

As an aside, while researching Eli, I discovered that he was partly responsible for the Civil War. Prior to the cotton gin, cotton was not a big cash crop. Processing the bolls was too expensive and slavery was on its way out because it wasn't economical. Slaves make for a lousy workforce. They cost too much to maintain and control and they don't work very hard since, like all victims of socialism, they have no incentives to do so.

By removing the labor required to process the bolls, the cotton gin made the use of slaves significantly less expensive in the production of finished cotton. Instead of phasing out the practice, big landowners in the South acquired more slaves and that set in motion the conflicting forces that led to a bunch of poor, Alabama and Indiana farm boys killing each other.

OK, I don't actually believe it was Eli's fault. The Southern plantation owners made the moral choices and they bear the lion's share of the blame from everyone, particularly the poor, Alabama farm boys and their families. Still, it's an interesting historical note that without the cotton gin, there probably wouldn't have been a Civil War in the first place.

Also, note that there is no parallel at all with people like LeBron James or Tim Cook and their massive paychecks coming from the slave plantation-factories of China. Nope, there's none whatsoever. 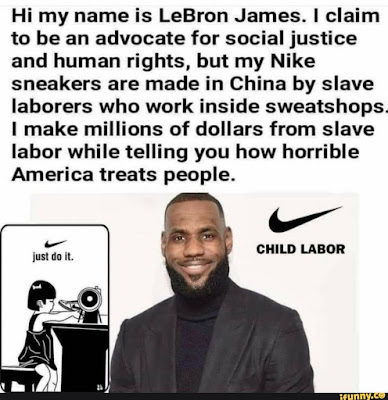 OK, I don't actually believe it was Eli's fault. The Southern plantation owners made the moral choices and they bear the lion's share of the blame from everyone, particularly the poor, Alabama farm boys and their families. Still, it's an interesting historical note that without the cotton gin, there probably wouldn't have been a Civil War in the first place.

I was surprised to agree with practically everything in this post, but you realize Arlington was a plantation right? But you are spot on that slave prices were dropping fast, because the economics didn't work. It was in part why the founders belief that slavery would eventually just fade away wasn't entirely optimistic nonsense. I think Lebron and the NBA in general certainly have some answering to do about their craven stance towards China. But we, the US, have not overall avoided Chinese goods, certainly you hardly find a middle class home that doesn't have some kind of Apple product (including mine). That said, it doesn't make what Lebron is saying about problems in the Black community wrong.

Yeah, I was wondering how that was going to come out. After your earlier postings, I got to wondering about the history of cotton find. And it turned out that the roller gins were invented about 1500 years ago. Since Whitney's gin was considered such a big deal, this strongly suggested that roller gins probably had issues.

And now you have identified those issues pretty clearly.

Tim, there's a video of an Indian woman using a rolling pin to seed cotton, but I don't have time to find it right now. I tried her technique myself and ended up smashing the seeds into fragments inside the lint. She clearly possessed a skill I lacked or else she was dealing with a cotton whose lint didn't cling to the seeds as strongly. In any case, it was a bit of foreshadowing that bothered me in the back of my mind as I made the faux-gin.

Slaves make for a lousy workforce. They cost too much to maintain and control and they don't work very hard since, like all victims of socialism, they have no incentives to do so.

Slavery (whether de facto or de jure) is at least as much of an issue with capitalism. For example, the mining camps of Appalachia in the early part of last century.

I agree with the criticism of Lebron James. Some people would use that to say we should ignore what James has to say, but I'm sure that's not what you meant.

One Brow and Anon - Nah.

Yet, there is no underground-railroad-like system for fleeing from socialist countries like Sweden (which is the type of thing Sanders/Harris discuss), and there was violence in the capitalist labor camps.

Slavery is not socialism. It is very amusing to watch people try to equate socialism with all manner of evil forces, when any connection is more metaphor than reality.