I spent a little time clicking around the Great Schools website, testing various hypotheses. In the process, something jumped out at me. Take a look at this data, taken from three large, public, California high schools and see if you see the same thing. 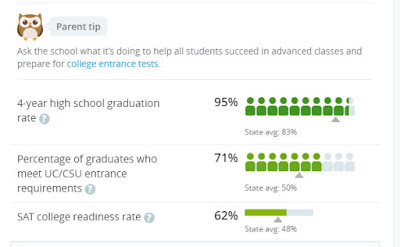 To me, this screams out that there is no correlation between competence and graduation rates. The students from the school in the middle are functionally illiterate and yet they graduate at almost the same rates as the other two. You'd have to conclude that the same thing happened from Kindergarten on to high school. They couldn't master the material, but they were still promoted.

I saw this same thing in the data from every school in every state that I sampled. No one cares. That may seem harsh, but no one is talking about it so that tells me no one cares. By the way, Trump made a phone call.

California spends a ton of money on education, so money isn't the issue. The cities where these schools reside are all run by Democrats as is the state, so the problem isn't mouth-breathing, racist rednecks. The center school comes from the most progressive location of the three.

I would argue that American Elites - political, media, entertainment, academia - no longer know how anything works, they only know how things feel.

Update: I didn't look at the data, but knowing the neighborhoods, it's a safe bet that the SAT college readiness rate correlates very strongly with illegitimacy rates. Duh.
Posted by K T Cat at 8:19 AM

Of course you know that the University of California system is considering dropping the SAT as a requirement for admission ( see: https://www.google.com/amp/s/amp.usatoday.com/amp/4310207002 ). A quote worth noting and considering is: “UC Provost Michael Brown, who also was in attendance, expressed concern about research showing the level of influence of family income and race on test results.“

So he claims, without proof, that race “influences” the scores. This is a racist and patronizing claim. It is also, likely, false. It is far more likely that, while they maybe correlated, there is a deeper causal element (although income may be at least partial causal). Your suggestion about illegitimacy rates or single parent families (which are known to correlated, and likely in a causal manner, to income) are more likely to be fundamental. But the “feel good” leftists are never going to accept that those are “bad”. Hence, their approach of blame the test, hide the results, nothing to see here, move along.

Yeah, I saw that. I predict that it will lead to faking graduation at the college level as well.