You Meet The Nicest People Working At Planned Parenthood

The archives on five Nazi war criminals that were made available by Argentina show a pattern that confirms what many have said for years, that war criminals found a safe haven here and that this country was probably one of the easiest in which to disappear and escape justice...

According to the documents released today, Josef Mengele, the Auschwitz death camp doctor known as the "Angel of Death" for his experiments on inmates, practiced medicine in Buenos Aires for several years in the 1950's. He "had a reputation as a specialist in abortions," which were illegal.

Mengele an abortionist? Who could have predicted that? 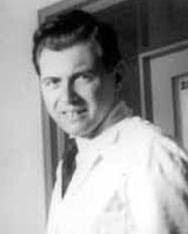 Apply today and you could find yourself working alongside some of the top medical researchers in their fields!
Posted by K T Cat at 6:09 AM

That can't be right; Mengele was supposed to be in Brazil, raising Hitler clones!

You missed the prequel. In that one, Rudolf Höss was in Ecuador making Mengele clones.