The story so far: Benton Harbor Michigan is #2 on the list of small cities with the highest percentage of single-parent households. When it comes to sexual liberty, they're living the dream, man. Here's our previous post on them.

Rush Limbaugh recently called a promiscuous girl a slut. Secular Apostate, Dean and B-Daddy have covered this. Carbonite, a company that specializes in online backups, used to advertise with Rush, but has removed their advertising because no one should be called a slut.

And now, on with the show.

Electablog is a thoroughly progressive site. The author posted this bit protesting the state takeover of Benton Harbor I mentioned previously. The Electablog comment thread is quite illuminating because of the presence of "SW Michigan Resident" who's got local perspective on the whole thing. Like this.

Geez dude, chill. :-) I get it, because I live it. Been living it for almost 30 years, watching Benton Harbor self-destruct. I remember when BH led the nation in per-capita murders. The riots. The three fired city managers each sue for wrongful dismissal and each get $1 million awards. The mayor getting busted for shoplifting. Illiterate city councils. Etc.

Cities only exist because the state lets them, there's no equivalent of "states' rights" for cities. BH had become a severe problem for the state, and the state no longer had the resources to bail them out, yet again.

Benton Harbor is a failed city with thoroughly libertine moral values, values acceptable to the management of Carbonite. In spite of this, I'm betting that there aren't too many Carbonite board members living there. You'd think they'd be happy to buy houses in a place where the word "slut" never crosses a person's lips with any of its real, Victorian, prudish meaning. 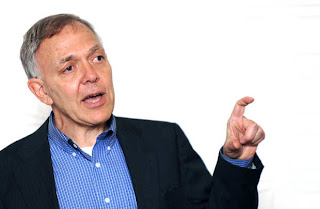 Wealthy Carbonite CEO David Friend doesn't like it when you call women who have lots and lots of unmarried sex "sluts." He also doesn't live in Benton Harbor. Nor do his daughters.
Posted by K T Cat at 11:40 AM

I think it's up to 6 cities in Michigan that face an EFM. Detroit heads the list. Pontiac has one,iirc.

Same nonsense is heard in Detroit.

I do kind of wonder whether the high single-parent rate is the direct cause of the problems in Benton Harbor and other Michigan cities that are having problems, or the result of massive population loss. According to Wikipedia, Benton Harbor's population was 19,136 in 1960, but has plummeted to about half that today.

If you picked any random city, and had the wealthiest and most ambitious half of the population move away to follow the jobs, I think that what you had left would look a lot like Benton Harbor, whether it started out as a hotbed of libertine licentiousness or not.

As for why they left, as I recall it started when Whirlpool moved its manufacturing to other areas, and there is no other manufacturing to speak of in Benton Harbor. So a big slug of the population left to find work elsewhere. Then it sounds like the city government became so corrupt and ineffectual that many more people felt it was easier to move away than to stay and try to fix things.

Thanks for the link!

Tim, since 1960, illegitimacy has gone from 5.3% to 36.8%. In the black community it's now up to 70%. Whatever was going on in terms of industries and the economy, the place was rotting out from the inside all along.

Wow so much hate and vitriol. How Christian of you!

How do you know she's promiscuous? And what business is it of yours even if she is! And how is bringing it up in anyway relevant to anything she is trying to say?

I've listened to the whole testimony, nowhere does she describe the lascivious behavior repeatedly attributed to her by Limbaugh. Her whole testimony described either married women's sexuality or women's non-sexual health care. for you information the pill is used for many things other than contraception.

Does it occur to you that Limbaugh is simply employing his usual tactic of vitriolic character assassination. When he doesn't want to attack the message, he attacks the messenger. He enjoys using intimidation to punish and stifle people he doesn't like. He completely misrepresents this woman to ridicule her and her ideas. He's a bully and a thug. This woman isn't a pundit, and isn't a public official. She is just a citizen exercising her first amendment rights. And Limbaugh hates when little person contradicts him. That's why he lashes out.

Bullies like Rush only succeed when others do his dirty work. By repeating Limbaugh's libelous attack, you are helping spread his vitriolic attack. Isn't this sort of intimidation exactly what you complain liberals do! You should know better!

Tnx for the link, Senor!

(1) How do you know she's promiscuous?

(2) And what business is it of yours even if she is!

Every government function I pay for is "my business", from the local school board to Pentagon acquisitions.

(3) And how is bringing it up in anyway relevant to anything she is trying to say?

She's begging for money precisely to support her sexual proclivities.

BTW, I read your "definition" of neo-cons. Laughable. I see things haven't changed much in Boulder Co. since I left. It's quite the echo chamber.

Having read the transcript of Sandra Fluke's testimony, I agree with Kelly that she didn't once mention anything about her sex life, or say anything that I consider remotely justifying Limbaugh's tirade against her.

Half of what she said was about the frequent need for "birth control pills" as a drug to treat polycystic ovarian syndrome, and the difficulty in getting insurance to cover prescriptions for that purpose because the person has to prove that they don't just want it for a contraceptive. And the other half was about use of contraception by married couples.

Now, one might argue that relatively low-cost drug prescriptions shouldn't be covered by insurance, and that birth control pills are just another one of those drugs that don't need to be covered. But her argument is that they should be treated like other drugs, and if other drugs are covered then these should be too. And she makes a good case for that.

Kelly, the point is that when rich law students do it, the cameras turn on and everyone talks about freedom because the law students and the daughters of CEOs have the resources to deal with undesired consequences. When the people of East St. Louis do it, the place falls to ruin and the resulting children go to jail or end up on drugs or get shot. The David Friends of the world are nowhere to be seen.

The rich have the freedom to behave like sluts. The poor do not. Social opprobrium is there to help the poor, not the rich. When you remove it from society, you screw people of East Cleveland and Camden and Benton Harbor and ...

Tim, Fluke's a freaking law student. She can deal with paying for her own sex. It's simply mind boggling to me that we've gotten to the point where we have to pay for the sex lives of law students at expensive, private universities.

My point is that the conversation is all about the problems of the rich. "How can we make it easier for rich college girls to get laid?" Meanwhile, in the homes of the high school drop outs who emulate Fluke's behavior, we get this.

To get to $1000/yr, you need to be consuming massive quantities of condoms or abortifacients.

Besides, what's the big problem here? Didn't we just have a bunch of Slut Walks? I was thinking it was a badge of honor, not a scarlet letter.

Is this the 2012 Progressive Revenge of Hester Prynne movement?