Can't Anybody Here Play This Game?

So President Obama needed to give a speech on technology. His speechwriters decided to throw in a paragraph mocking Republicans for opposing algae and windmills or something like that. They did their research on the web and came up with a list of famous quotes illustrating people who missed badly on the impact of one major invention or another. President Rutherford B. Hayes got the verbal cosh on the back of the neck for being an idiot about the telephone.

There always have been folks who are the naysayers and don’t believe in the future, and don’t believe in trying to do things differently. One of my predecessors, Rutherford B. Hayes, reportedly said about the telephone, “It’s a great invention, but who would ever want to use one?” [Laughter.] That’s why he’s not on Mount Rushmore — [laughter and applause] — because he’s looking backwards. He’s not looking forwards. [Applause.] He’s explaining why we can’t do something, instead of why we can do something.

The problem is the quote is dead wrong, both in substance and in spirit. President Hayes had the very first telephone in the White House (his phone number was "1") and was a big proponent of new technology. Obama's public ignorance has led to a hilarious series of Rutherford B. Hayes images like this one. 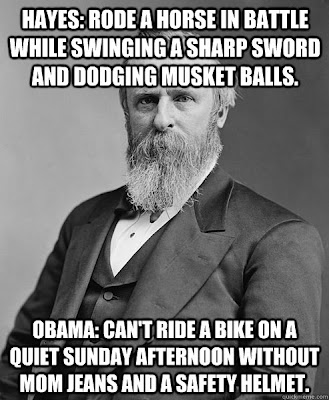 Mark Steyn's latest column goes to town on the rest of the blunders in that speech, concluding with this blistering paragraph.

So let’s see. The president sneers at the ignorance of 15th-century Spaniards, when in fact he is the one entirely ignorant of them. A man who has enjoyed a million dollars of elite education yet has never created a dime of wealth in his life sneers at a crippled farm boy with an eighth-grade schooling who establishes a successful business and introduces electrical distribution across Michigan all the way up to Sault Ste. Marie. A man who sneers at one of the pioneering women in broadcasting, a lady who brought the voices of T. S. Eliot, G. K. Chesterton, and others into the farthest-flung classrooms and would surely have rejected Obama’s own dismal speech as being too obviously reliant on “Half-a-Dozen Surefire Cheap Cracks for Lazy Public Speakers.”

The president's speeches have been filled with this kind of rubbish. For example, his speech to the Islamic world was filled to the brim with historical howlers. Obama doesn't write these speeches himself, he pays people to do it for him. Who's writing these things and why do they still have jobs? He must have the worst speech writing team ever. Can't anybody in that office play the game?

Or is getting history right besides the point?
Posted by K T Cat at 12:11 PM

Where's J. Edgar when you need him...

Sadly, getting facts straight has never been a priority in political speeches.

What I love about the Internet is that it is now possible to catch them at it in near-real-time, and then to see to it than anyone who cares can find out about it almost as quickly.

Of course, that means that you can send a lie around faster too, but at least now the truth has a fighting chance.

Lawdamercy, I do love that image.

BTW, check out the Flat Earth Myth... i.e., "[The myth] that educated men at the time of Columbus believed that the earth was flat, and that this belief was one of the obstacles to be overcome by Columbus before he could get his project sanctioned..."