I rent from Dollar every chance I get. Probably because of this, they keep giving me upgrades for free right at the counter. This time was the best ever because they gave me a convertible PT Cruiser during some spectacular weather in Virginia. 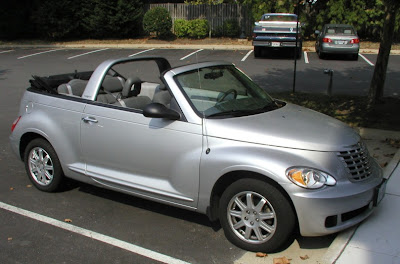 My trusty steed.
With the top down, it kind of looks a little like a VW bug, don't you think? In any case, it was great fun to drive. I took it all over God's creation, too. On Thursday, my meetings ended at about noon, so I blasted up into Shenandoah National Park and zapped through the winding turns of Skyline Drive, making the fallen leaves dance like it was a car commercial.

My only complaint is the same one I have with almost all Chrysler products. With the top up, the thing has blind spots on either side behind the driver so large that you could miss a semi as you're trying to change lanes. Luckily, I had the top down almost all the time, so this was never a problem. Other than that, I really liked the car. The controls are laid out better than any other car I've driven. It was responsive and comfortable, too. The automatic ragtop controls worked like a charm every time. It's hooked into the speedometer somehow, so you're prevented from trying to raise or lower the top at high speeds. No parachute action for you!

I got some good photos of deer while in Shenandoah Park. I'll post those later.
Posted by K T Cat at 5:27 AM

Oooo, be careful about renting a convertible PT Cruiser in nice weather. I did that for my wife and my 30th anniversary. I had so much fun I ended up buying one! I can honestly say this is the funnest car I've ever owned. I'm glad you're having fun with yours.