I haven't had the ability to make home movies for a long time. It's something I've been wanting to do, but never had the cash to get back into it. Recently, because of my frugal ways (mostly using the Dave Rasmey cash envelope system), I was able to afford a low-end video camera, the Canon ZR-800. With that and a few things I already had around the house as well as some very inexpensive software available on the web, I was able to produce videos like this. 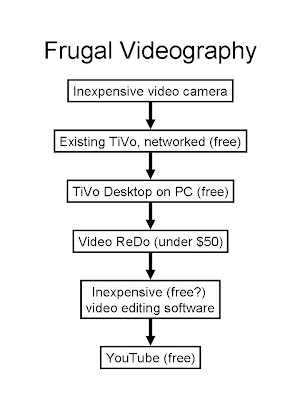 It took a while to figure out the whole chain, but I ended up with something that produces excellent videos for very little money.

I would be happy to share what I've learned with anyone who wants to leave a comment or send me an email. The key part of this process was learning how to use the TiVo to digitize my videos and get them to my computer. The ZR-800 can do this by firewire, but I don't have a firewire port on my PC and it would cost money to buy a firewire card and cable, so I didn't do it. With some searching on the web, I found the trick to capturing the video off of the TiVo's A/V input jacks and from there I was home free.

When I was first saving up for a video camera, the one I wanted was the high end Sony Handicam that stored the videos to a hard drive. It cost about three times as much as the Canon. It had bells and whistles that were enticing, but in the end I decided that I could do almost as much with the Canon. The key feature for me was optical zoom. That was something the camera had to do well, no matter what. The Canon has 35x optical zoom, about the same as the Sony. All of the digital features of the Sony are now done by the video processing system shown above.

The end result is great videos for about 1/3 the price. Pretty cool, no? For more pretty cool posts on how to live well while spending less, visit this week's Festival of Frugality.
Posted by K T Cat at 6:50 AM

Studio 1 Productions has a FREE PDF book on producting Special Interest Videos. Just go to http://www.studio1productions.com/sivkit.htm
Then scroll down the page and click on the Download Link.