The Democrats Double Down on Stupid

Being at least peripherally in the business, I pretty much knew what Petraeus was going to report before he showed up. Having listened to the talk shows and heard all the political wrangling, I figured that Harry Reid, Nancy Pelosi and the rest would move away from their retreat and surrender positions and pick up some kind of attack on Bush and the Maliki government, but agree to leave the troops in Iraq.

It never occurred to me that they would stick to their retreat and surrender plan. It was just too stupid to contemplate and yet that's exactly what they've done. I don't know who is giving them military advice, but they need to be fired immediately. This slide alone from General Petraeus' presentation tells you everything you need to know about the war. 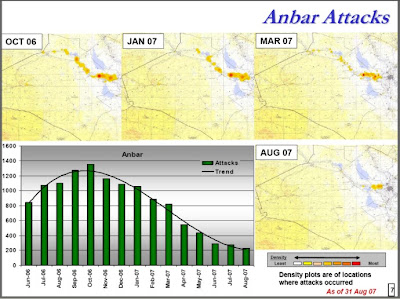 Anbar was supposed to be Al Qaeda's (AQ's) capital for the new Islamofascist Iraq. They've been almost entirely driven out of the province by a combination of Allied and Iraqi forces. This progress is irreversible under any conditions short of Reid and Pelosi's plans for retreat and surrender. Just like the capture of Antwerp in World War II, which gave the Allies a massive supply pipeline to feed their advance into Germany, the elimination of AQ in Anbar will lead inexorably to their defeat. You just don't come back from losses like this. In fact, I defy anyone to come up with a counterexample. 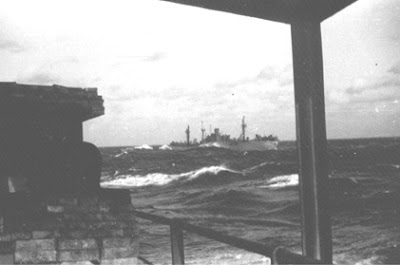 Once Antwerp had been opened to the big freighters and the Allies could move in large amounts of supplies, the game was over.
Time is no longer on AQ's side. The proof of this is that there were no spectacular attacks leading up to General Petraeus' report. AQ understands the PR nature of the war very well and they knew this report to Congress was coming, yet they could manage no massive bombing campaigns. Exhausted, depleted and on the run, life is just going to get harder and harder for them.

That's what makes the Democrats' call for retreat and surrender all the more inscrutable. This presentation gave them an out where they could have salvaged some of their honor and moderated their positions. Time isn't on their side, either. Even the MSM has begun to take note of improvements in Iraq. As time goes on, more and more stories about the changes taking place in Iraq will surface and their position will become more and more untenable. Their current strategy makes no sense to me at all.

If someone can provide it, I'd love to see the explanation.

H/T: Thanks to Hot, Fresh, Now for giving me the link to the General's presentation.
Posted by K T Cat at 6:22 AM

Given how stupid the Dhimmis are and and that even so it was just conceivable that they might have a shot at the White House, it's excellent news that they put their stupidity beyond doubt. Makes me feel warm and fuzzy all over.

Here's one for ya KT, End of Liberty... The arrest of scores of protesters last Tuesday in Brussels should set off alarm bells for those concerned with the future of liberty as it has heretofore existed in western culture.... A group of European citizens recently applied for permission to demonstrate in protest against the continuing dhimmification of Europe and the submersion of Western culture by the uncontrolled immigration of adherents of the Muslim faith into the western European countries. That application for 11 September 2007 was denied by the socialist mayor of Brussels on the basis that the "public peace" could not be guaranteed by the Belgian authorities. So they arrested these guys.

Ligneus, it's just mind-blowing to me that they could be that tin-eared. Hillary surprises me the most. Rudy has a new ad out on YouTube that just kills her.

I saw that post you mentioned. I think the Europeans are hypersensitive about anything that smacks of the Nazis (protesting immigrants) to the point where they've lost any clue at all about who they are. It's sad.