Salon Gets the Subprime Loans Mess Half Right

Our Missionary to the Frozen, Northern Wastelands asked me what I thought of this article in Salon about the subprime mortgage mess. My response is a resounding "Meh."

It did a great job explaining some things to me that I never knew, specificaly how the mortgage lenders sliced up their securities to appeal to all kinds of investors. Here's the best part.

After a mortgage lender makes a loan to a homebuyer, that loan is packaged up with a bunch of other loans into a security -- a financial instrument that can be traded. Securities are rated by rating agencies according to the chances that the underlying assets will be defaulted upon. U.S. Treasury bonds, for example, get stellar AAA+ ratings because the U.S. government is considered likely to meet its obligations.

A security based on a pool of subprime mortgage loans would normally not deserve an AAA+ rating. Subprime, by definition, means "not so good." Subprime loans are made to people who can't put together a down payment or have bad credit, or can't prove they have a job. Subprime loans are risky!

...Enter the collateralized debt obligation. The CDO takes a pool of risky mortgage loans and divides it into slices...For simplicity's sake, let's say that a mortgage-backed security gets divided into two slices when it is transformed into a CDO -- a senior slice and a junior slice. Let's say that the senior slice gets rated AAA+ and the junior slice gets rated BBB-. But if anything goes wrong -- if the homeowners whose loans are part of this security start missing their payments -- the investors in the junior slice have to lose all of their money before the investors in the senior slice start feeling any pain.

In short, if you wanted to make more money and were willing to take greater risk, you bought the junk grade end of the mortgage security. If you were conservative and didn't like risk, you bought the high grade end of the mortgage security. Actually, I really like the idea. It allows private citizens and investment institutions to make choices and offer financial services to people that might not otherwise have access to it.

Salon's explanation of the collapse of this is way too political. They take the traditional leftist viewpoint of the evil Wall Street bankers secretly manipulating the market and cheating and robbing and (quite possibly) stealing money from orphans and widows.

To me, that's all baloney.

I do not subscribe to a political explanation to this issue any more than I subscribe to a political explanation to, say, our problems in public education. At its most basic level, the problem with the subprime mortgages was that money was loaned to people who should not have been trusted with money. From source to destination, the money flowed through many hands and each of those hands belonged to a person who made a bad decision. Everyone, from investor to broker to banker to borrower played a part in the act of loaning money to a bad risk.

Much of politics is simplifying explanations of complex events to make it seem like your opponent is evil, stupid or greedy. The Salon article dives into this head first.

Wall Street traders, hungry for more risk, fixed the real economy to deliver more risk, by essentially bribing the mortgage originators and ratings agencies to fumble the ball or make bad loans on purpose. That supplied CDO speculators the raw material they needed for their bets, but as a consequence threw the integrity of the whole housing sector into question.

Whatever. I'm sure there's plenty of blame to go around and we can all point at this person or that as a villain. Salon is a political magazine and it needs simple explanations so you can feel good about hating their opponents. 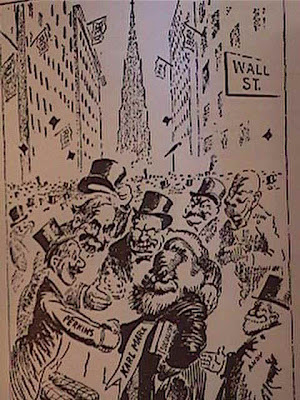 Salon's view of Wall Street
Look, loans were made to people who are bad money managers. It happens. Sometimes it's because of greed, sometimes it's because people overestimate their own capabilities. Think of all the hands the money touched on it's way from investor to borrower and tell me what their political affiliation was. As we're finding, John Edwards and Hillary Clinton were heavily invested in these kinds of things. So what? So we can all throw simplistic darts at them and stick our tongues out and make raspberry sounds as we gloat. Or we can prance around the Wall Street Republicans who helped create these securities. If that's what turns you on, go for it.

There's lots of noise and chatter, but it all comes down to this: Learn how to manage your money well and you won't get into trouble.

Update: If you're turning to Salon for financial analysis, then you deserve what you get. Here's another take on the subprime mortgage problem from the place to go for such information, the Wall Street Journal. Excerpt:

When times are good, investors take on risk; the longer times stay good, the more risk they take on, until they've taken on too much. Eventually, they reach a point where the cash generated by their assets no longer is sufficient to pay off the mountains of debt they took on to acquire them. Losses on such speculative assets prompt lenders to call in their loans. "This is likely to lead to a collapse of asset values," Mr. Minsky wrote.

Thanks for the analysis.

Minsky moments can be "roughly" forecast. I recently reviewed a book that is based on the Elliott Wave Theory. The ideas seem similar to those of Minsky.