A Quick Summary of the Subprime Loans Mess

There's a terrific summary of the subprime loans issue in (where else?) the Wall Street Journal. Because you probably need a subscription (why don't you have one?) and because I need to write this to clarify it in my own mind, here's a summary of the situation.

Asian economies produced lots of savings. The US Central Bank lowered interest rates to prevent deflation following the bursting of tech bubble and the attacks on 9/11. These developments and others produced a glut of cash for investment firms. They had to put the cash somewhere, some place that would make them money. First, they loaned it to people with good credit and collateral. After they sopped up all the demand from borrowers who were a good risk, they still had lots of cash to loan. So they started lowering their standards. As they did so and loaned all that money, much of it went into real estate. More people could get loans and that meant that demand for homes went up.

When demand goes up, prices go up. The housing market went crazy. There was still more cash to lend, so standards were lowered over and over again. Finally, wacky loans were given to people with lousy credit histories and no evidence that they could make the payments. Remember, the investment bankers had to put that money somewhere and they had to prove to their investors that they could get returns as good as everyone else. If they didn't, their customers would go somewhere else.

People with lousy credit (subprime borrowers) usually have lousy credit because they don't manage their money very well. When this class of borrowers were given access to the loans, they did what they had always done. They used it poorly. When they ran out of cash, they got more by refinancing their homes which had gone up in value because of the real estate boom created by the excess cash. Instead of paying down their loans, they ran them up. That's what people who are a bad lending risk do.

Once the housing market stabilized, the people who couldn't manage their money ran out of ways to make their payments. Without access to loans and without enough income to cover their debts, they started defaulting on their mortgages.

Quick moral to the story: if someone has bad credit, don't lend them money. They've got bad credit because they're bad risks. Some people are poor because they do stupid things.

Following the S&L problems of the 1980s, traditional banks were restricted from lending to people with bad credit. Looking for a good rate of return, a new class of real estate lender emerged: the private investor. These private investors could make loans that were much higher risk than were allowed to traditional banks. This group made lousy decisions, in part because the loaning frenzy had led to opacity in the investments.

Now the chickens have come home to roost. 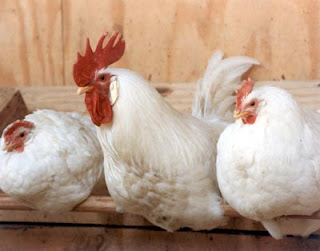 Chickens, having come home to roost.
The bad risk borrowers were lousy money managers and squandered their money on big screen TVs, jet skis or maybe they just didn't make enough money to make their payments in the first place. Whatever the cause, they can't make their payments. The investors who loaned them this money are now stuck with loans that aren't paying off. The investors have debts, too. In order to pay their bills, they're having to sell things that actually have value, including their stocks. With lots of people having to sell to cover the loans made to bad risk borrowers, there are more sellers than buyers. Prices go down.

Some mortgage lenders don't have enough quality assets to cover their debts and they're going bankrupt. When they go bankrupt, all of their investors are screwed. Their assets are frozen while bankruptcy proceedings decide who should get how much of what's left. Those investors have bills of their own to pay and they no longer have access to their money in the now-bankrupt mortgage lenders. That means they have to sell other things to get their cash to pay their bills. More sellers, fewer buyers. Prices fall.

Eventually this will all stabilize. It always does. Banking and investment regulations make the world a much less volatile place than it used to be. Just go back in history and check out some of the financial crises of the 19th century. Total chaos. Things will be OK in the long run.

So long as you learn how to manage your money.

If I've gotten any of this wrong, please correct me in the comments. In any case, here's an excerpt from the article linked above that explains part of the problem. If you can, read the whole thing. If you can't, buy a subscription to the Wall Street Journal. It's the only newspaper on Earth worth getting.

Lou Barnes, co-owner of a small Colorado mortgage bank called Boulder West Inc., has been in the mortgage business since the late 1970s. For most of that time, a borrower had to fully document his income. Lenders offered the first no-documentation loans in the mid-1990s, but for no more than 70% of the value of the house being purchased. A few years back, he says, that began to change as Wall Street investment banks and wholesalers demanded ever more mortgages from even the least creditworthy -- or "subprime" -- customers.

"All of us felt the suction from Wall Street. One day you would get an email saying, 'We will buy no-doc loans at 95% loan-to-value,' and an old-timer like me had never seen one," says Mr. Barnes. "It wasn't long before the no-doc emails said 100%."

Until the late 1990s, the subprime market was dominated by home-equity lines used by borrowers to consolidate debt and by loans on mobile homes. But when the Fed held rates down after 2001, lenders could offer borrowers with sketchy credit histories adjustable-rate mortgages with introductory rates that seemed affordable. Mr. Barnes says customers were asking about "2/28" subprime loans. These offered a low starter rate for two years, then adjusted for the remaining 28 to a rate that was often three percentage points higher than a prime customer normally paid. Customers, he says, seldom appreciated how high that rate could be once the Fed returned rates to normal levels.

Demand from consumers, on one side, and Wall Street and its customers on the other side prompted lenders to make more and more subprime loans. Originations rose to $600 billion or more in both 2005 and 2006 from $160 billion in 2001, according to Inside Mortgage Finance, an industry publication.

At first, delinquencies were surprisingly low. As a result, the credit ratings for bonds backed by the mortgages assumed a modest default rate. Standards for getting a mortgage fell. About 45% of all subprime loans in 2006 went to borrowers who didn't fully document their income, making it easier for them to overstate their creditworthiness.

The delinquency rate was a mirage: It was low mainly because home prices were rising so much that borrowers who fell behind could easily refinance. When home prices stopped rising in 2006, and fell in some regions, that game ended. Borrowers with subprime loans made in 2006 fell behind on monthly payments much more quickly than mortgages made a year or two earlier.

When banks get in trouble, federal deposit insurance encourages depositors not to flee, and in extreme circumstances, banks can borrow directly from the Fed. But banks are no longer the dominant lenders. After the S&L crisis in the 1980s and early 1990s, regulators insisted banks and thrifts hold more capital against risky loans. This tipped the playing field in favor of unregulated lenders. They financed themselves not by deposits but by Wall Street credit lines and by "securitization" of their loans -- in effect, the sale of the loans to investors.

The consequences proved painful. New Century Financial Corp., founded in 1995 by three former S&L executives, was the nation's second largest subprime lender by 2006. When its borrowers began falling behind, Wall Street cut off its lines of credit and forced it to buy back some of its poorly performing loans. New Century couldn't fall back on deposit insurance or the Fed. It filed for bankruptcy protection in April, wiping out shareholders and triggering market-wide fears about the health of the subprime business.

Subprime lenders can help you secure financing and reestablish your credit. With bad credit, you can’t afford not to refinance a high interest mortgage. Working with the right lender, you can trim your loan costs and help your monthly budget. You even have the option to cash out part or all of your equity to pay off high interest credit card debt.

The problems in the USA have really started to hit the bad credit mortgage market hard in the UK.
One of the biggest Bad Credit Mortgage lenders Northern Rock has collapsed and has been bailed out by the UK government to the tune of $52.8 billion. This is tax payers money - it is costing each tax payer around $4k each!!!!

Anyone with a bad credit record in the UK is finding it increasingly difficult to get a mortgage as every UK bank doesn’t want to take on the risk.

It’s now a question of sorting out your finances, stop spending and inprove your credit rating

the borrowers can enjoy the facility to obtain the loan amount on the same day of approval. Thus, for all these reasons, this plan, the loan did not take too long to be a favorite financial loan solution to many applicants. for more information about 90 Day Payday Loans