From today's WSJ comes an article (subscription may be required) that's almost too good for words.

Poland has a herd of bison. The European Bison Program is trying to teach them to migrate so they can mingle with other herds. The bison are proving to be too lazy to do it, even when shown the benefits of doing so.

To keep the animals from extinction, Mr. Niedzialkowski, coordinator of the European Bison Program, is trying to change the migration patterns of about 400 lowland bison (Bison bonasus bonasus) roaming the primeval forest in northeastern Poland. He wants to persuade Polish bison to breed with other wild herds of the same species in neighboring Lithuania and Slovakia.

To do that, the bison, which can weigh nearly 2,000 pounds, need to stop gathering in one large herd and eventually must learn new migration routes now possible with the expansion of the European Union. In this town of one-story wood houses on the edge of Bialowieza National Forest, Mr. Niedzialkowski runs a project to lay out trails of beets and hay -- food to coax the bison to take their first small steps beyond the forest and eventually, he hopes, across borders.

"It's not working very well," says Wolfgang Fremuth, a zoologist at the Frankfurt Zoological Society, which is helping to finance the project. "Bison are very lazy and they haven't understood where to go. It may take a couple of years for them to learn."

Too lazy to avoid their own extinction. What a metaphor for the EU. 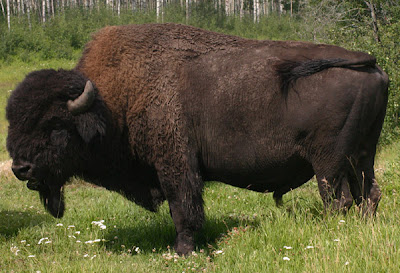 I can't tell if this is a bison or a gigantic, ratty, old sofa.
Thinking about it some more, these don't sound like Polish bison. They sound more like unionized French or German bison to me. I would have expected Polish bison to have figured it out completely and to have raced about the countryside smacking the other bison upside the head and breeding at will.
Posted by K T Cat at 7:08 AM