I, Jacob the Syrian Hamster, am back after a long hiatus with another post wherein I join the ranks of the professionally unhappy, the Mainstream Media. As you know from watching the MSM and reading their newspapers (does anyone still do that?), life sucks. All news is bad news. Thanks to the Puppy Blender, we have this article from Newsweek.

Around the room (somwhere in Anbar Province, Iraq), Marines and Iraqi tribesmen and police are sitting together, swapping jokes and stories. Some of these Iraqis were probably shooting at Americans less than a year ago. Now they and the Marines are fighting side by side against Al Qaeda. "We are not just friends but also brothers," the sheik tells Kozeniesky. "This is a new beginning for both of us." Kozeniesky can only agree: "Things have changed dramatically." A 5-year-old Iraqi boy in traditional robes and headdress is racing around the room and vaulting into U.S. troops' laps. What does he want to be when he grows up? He proudly announces: "American general named Steve!"...But even as the Americans rejoice in Ramadi's transformation, they worry that it may not last. Some townspeople are already losing patience as they seek Baghdad's help in rebuilding their community...Col. John Charlton, commander of the nearly 6,000 U.S. troops in central Anbar, warns of political trouble ahead if reconstruction falters. "Now that the shooting's stopped, people's expectations have risen wildly."

Italics mine. Yep, the place has been peaceful for a couple of months. A massive shift in alliances has taken place, completely in our direction. All that means is that if the infrastructure isn't in place in a few days, we're totally screwed. Life sucks.

Here at the 'Post, we're in a similar state. On a recent trip to Virginia, I met up with a family of ducks. 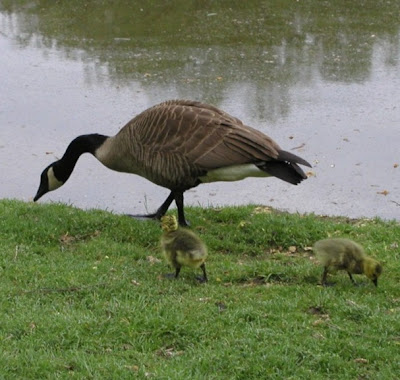 Oh, sure, it looks like a scene of pastoral beauty, but in reality it could just be the prelude to an avian attack with the mother duck biting my legs or perhaps me slipping and falling as I walk, sticking my hand in duck feces and contracting incurable bird flu. Life sucks.
Posted by Jacob the Syrian Hamster at 6:41 AM

Whoops! Did I blow it? Well, geese, ducks, whatever. To us hamsters, they're all just big birds.