I've posted a few things lately questioning the Global Warming (GW) movement. I'm becoming convinced that they're just a front for the old pro-Soviet socialists among us. Having said that, I'm quite supportive of many of their goals.

Here's a photo of San Diego from space. 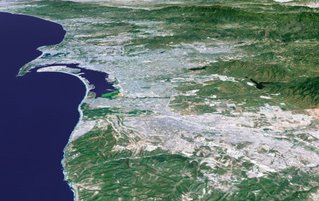 This is what San Diego would look like in the absence of humans. 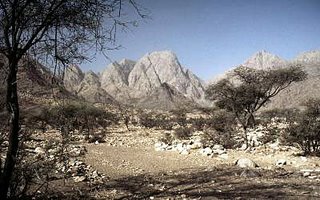 Notice something? There's no water. None. I came to San Diego in 1979. Since that time, the city has repeatedly passed "slow growth" initiatives designed to prevent the place from becoming what you see in the first photo. Time after time, local developers went around, over and through these laws, both in court and at the ballot box in order to build, build, build. Their motivation was greed. They bought the land cheap, developed it and sold it for tons of cash. Each individual development had a tiny impact on the environment, but in the aggregate it was disastrous.

Quality of life has declined and we're just a drought away from massive water rationing. This might be the year considering the low rainfall we've had. The San Diego freeways are a nightmare. I went up to North County yesterday at 2 PM and the I-5 north of Del Mar was already a total parking lot.

How can you have gridlock at 2 PM? What does that tell you about unsustainable development?

You can forget about going to the beach on a weekend. No parking and no space. I took the kids down to La Jolla Shores last summer on a Sunday at 5 PM. When I had done this in the past, I had always had good luck. By that time on Sunday, everyone is heading home to get ready for work on Monday. What did I find? The parking lot was still full and had overflowed blocks away from the beach and when we finally made it to the beach, there were only postage stamp-sized open spots on the sand.

So what choices do we have? Our College of Cardinals has posted a great video promising a look into the people behind GW, but it looks a lot like what the San Diego developers were saying in 1982. There's a local environmentalist newspaper called The San Diego Earth Times that is simply reprinting rubbish from Nancy Pelosi.

We've turned local environmental protection and sustainable growth into a national election issue. I don't think it should be. Frankly, I don't see anything in the GW movement that would have stopped the paving of San Diego. All I see are people who are deranged with idiotic hate for George Bush.

Unfortunately I don't have a good wrap up for this. Maybe something will come to me later.

Update: Our Prelate to the Primates has a post that takes the Hollywood Ecopreeners out to the woodshed.

Jammie Wearing Fool goes after them as well.
Posted by K T Cat at 7:56 AM

The paving of San Diego? You should see Houston!

At least there thr traffic isn't too bad... unless you hit the northwest freeway during rush hour.