My TiVo decided I needed to watch The Core. Usually I delete the things it says I need to watch, but I decided to take a chance on this one.

The Core is the answer to the question, "What kind of disaster movie would you make if you had ADD?" In the movie, the core of the Earth has stopped spinning, or is slowing down or Look! some lasers to cut through rock and the rocks will blow up and then we can travel through Wow! there's static discharge in the air and huge lightning storms and Rome is getting blasted and there's running and Hey! we just hired this punk kid to hack the Internet and eat Hot Pockets and keep the news of the impending doom from getting out and causing Whales! there's whales following us as we dive into the ocean and they're singing I think it's Zounds! a crash in the magma because of an air pocket ...

Its science is on the order of the 1960s James Mason / Pat Boone movie, Journey to the Center of the Earth. They're going to restart the core spinning by blowing up some huge bombs, but since explosions tend to go in all directions, it's not clear how a massive explosion would start anything spinning instead of just spattering it all over the place.

The effects are moderately good for 2003. The love interest, Hillary Swank, is cute enough if you like butch, hyperambitious women. I don't. As an aside, I've had enough of this kind of heroine. In fact I had had enough before it started. I don't need to see one more woman that's more of a man than the lead actor and more of a woman, too. I half expect to see Maureen Dowd's (author of Are Men Necessary?) name on the credits in movies like this. 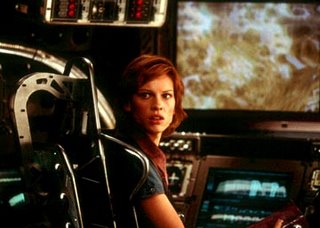 After I pilot this earth ship I'll have sex with you and then make partner at the law firm.
I admit I haven't finished the movie yet, but I might be done with it anyway. You don't watch movies like this for the plot. I'm at the spot where they've just crashed their earth ship and you know they'll come up with some clever way to repair it and blow up everything in just the right way. It won't be too clever, since the science is all of the Flash Gordon variety which means it's all deus ex machina anyway.

Come on, fellows, let's save the Earth!
I don't think I'll give it a second review once I'm done. I think I'd rather re-watch the Saints-Eagles playoff game. Now that's a good story!
Posted by K T Cat at 6:32 AM