At the end of a long day, I checked my YouTube subscriptions and watched this video yesterday. It's someone called Gina Florio talking about how she was red pilled. I have no idea who or what a Gina Florio is, but what captivated me was her description of the cult indoctrination at Harvard.

Also yesterday, while waiting for some scripts to run, I engaged in a desultory conversations on Twitter. Here's the exchange that seeded the clouds of conversation.

Nope and nope. It's not the failure of the state, it's the collapse of the traditional family. You can have as robust a state as you like, but without married moms and dads, you're screwed.

I had a back-and-forth for a bit with a young, black man who blamed systemic racism for everything, probably up to and including his acne. I brought up the example of Baltimore, wherein sincere, white anti-racists and black activists have run everything for 60 years and he replied, apparently unironically, with a Baltimore Sun story on police malfeasance that featured this photo. 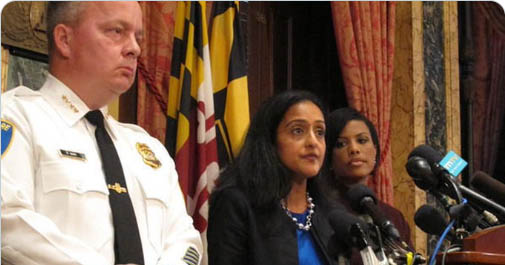 I dunno, man, if I didn't know better, I'd say that looked like a white cop, undoubtedly full of racism, with a pair of black women in some sort of civilian, supervisory roles. That such an obvious data point slipped by the dude attests to the thoroughness of his racialist training.

Finally, there was a story on Fox Business about inflation numbers. I guess March came in at 0.6% after February's 0.4%. Of particular interest were all the right-wing cultists in the comments blaming Biden for printing money like mad. Um, guys? We just finished 4 years of Mr. Debt. Trump and his buddies in the legislature did the same thing. Certainly not to the level of madness of the Ds, but let's not kid ourselves here.

And so everyone received their inputs and everyone ran their subroutines. At the end of the day, I went downstairs and wife kitteh was watching PBS news. I hadn't seen it in a long while. I felt like I was watching a Soviet newscast. The proper narratives* were being reinforced with every story in a tone and patter fit for stupid children.

Don't think that I'm sneering at the people involved in these stories. The young, black man was pathetic only in that his programming had turned him into a whiny, self-defeating loser. The conservatives at Fox Business had lost whatever acumen they had and were merely repeating talking points like magpies. Worse yet, many bragged about getting out of the market to avoid some kind of Biden Crash when cash might be the dumbest investment you can have during an inflationary period.

I know we're all programmed in some way or another, myself included, but yesterday was full of extreme examples of it.

* - PBS had three narratives in particular.