... someone I never met. The altercation was in a place I've never been. The big dude with all the fentanyl in his bloodstream was also someone I never met. I didn't keep up with the trial, other than what I couldn't avoid. The event doesn't seem to have altered the course of our supertanker of cultural rot, so we keep lumbering on in the direction of broken families and massive debt.

Instead of being glued to the political yakkers, I experimented with my GoPro Hero 9 yesterday. The experiments were a success in that they discovered a dead end. Dig this horrible photo. Click on it to see its full horribilosity. 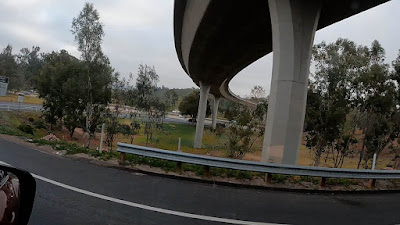 Motivation: I love derelicts. Derelict buildings, derelict barns and most especially, derelict ships. I don't know why, but there's something about stuff falling apart that fascinates me. I like to wonder what it would take to rehabilitate them. When you drive through the rural countryside, you see tons of derelicts. Most of them are barns, which are built with an expected lifespan*. It's too hard to maintain them, so you build them cheaply and let them decay into collapse.

How do you photograph the things while driving? Dittos for houses and boats. You can't ever be sure if someone isn't still living there and would take umbrage, perhaps buckets of umbrage**, at a stranger stopping and getting out of his car to take a photo of their ruined property. With my new Hero 9 and its suction cup attachment device, I thought I might stick it on the passenger-side window, turn on the video and drive. I could then extract stills of any derelicts I passed.

The image above was the result of my first experiment. Meh. It doesn't hold a candle to stopping, rolling down the window and unlimbering the Nikon Artillery Piece. I had hoped to find a remote shutter trigger for my Nikon D3500, but it turns out that the 3500 is one of the few Nikons that cannot be triggered remotely. Argh. So much for attaching that brute to the window and firing away while driving.

So we still don't have a solution that is both unobtrusive and produces quality results. Oh well. As Thomas Edison said to William Joseph Hammer as they trudged back to the lab, carrying big screen TVs and Nike shoes after rioting for justice, "Bill, there's got to be a better way to take photos from a moving car. If we keep working, we just might find it."

* - This is only a theory on my part, city slicker that I am.

I did a search on “Google Street View device” (since I’ve seen the cars with those ‘towers’ on them). The first result was:

There are a few under $500, and apparently come with software to publish to Street View. Maybe one of these (if you look carefully) would fit what you want to do.

Thanks for the tip!

I'm wondering if I can tailor the settings on the GoPro to do the job. It will take HD video at 60fps. That certainly seems to match the specs on the ones at that link.

The picture doesn't look that horrible. It's just a bit dark, and maybe distorted from the go-pro wide angle lens (although the curves in the picture might be accentuating that). I'd think it would be at least somewhat fixable in post-processing.

And if you want to take pictures of derelict buildings, I think I know where to find some. A friend of mine called the whole area around Torch Lake and up into Calumet "A 19th-century industrial wasteland". I think you'd like it.