When I have time to kill, I play Jungle Gem on my phone. It's one of those brainless gem games where you have to match gems to make things happen. Think Connect 4, but without all the 19th Century English literature and quadratic equations.

Yes, it's that stupid.

It's also free, so it's paid for with ads. The ads are clever, able to see where I've browsed, so I've gotten ads for Louisiana Crawfish Company, which I've checked out online. It also has ads for other games, insurance companies, Uber and more. No big deal, right?

As of yesterday, I've begun seeing ads for Bigo Live. This Bigo Live. 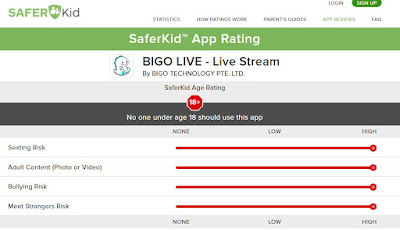 SaferKid's warning doesn't surprise me at all as the ads feature videos of teenage girls wearing next to nothing, writhing about. I found this article about it in the Hindustan Times. It's essentially a porn-on-demand app.


(I)n India, the application has become a platform for obscene content -- with mostly men flocking to live-stream windows of women responding to their comments and video calls. A quick glance at the application shows multiple thumbnails featuring objectionable images of women.

While some of the live streams are “harmless” ones of women or men dancing or doing random things, some feature women making innuendos and lewd gestures. At the bottom of the live stream screen, you’ll notice a flurry of messages asking the women to perform certain activities or respond to their messages (similar to comments on a live video on Facebook).

I opened a live stream of a vlogger called “Tannu”, who could be seen lying in bed in her night gown. The camera mostly focused on her breasts. The screen displayed a phone number where she demanded the transfer of a certain amount of money in her Paytm account, after which would make a WhatsApp video call to the person concerned.

How big is it? According to the article, Bigo Live claims to have 150,000,000 users around the world. That's a whole lot of little girls getting paid for some indirect action while degrading themselves. I would bet that Indian women, like Japanese women and American women, are starting to wonder where all the good men have gone. I don't know, girls, maybe you ought to stop worrying about how many women get one-in-a-million jobs like Fortune 500 CEO slots and start worrying about the 50,000,000 chicks who will give thrills away for a small fee.

One question: Is this part of the patriarchy?
Posted by K T Cat at 4:45 PM

The Village Bike phenomina has always been an issue for chaste women; the new issue is that folks with power stopped shaming the 'riders' and started shaming the chaste.

"One question: Is this part of the patriarchy?"

Unless conservatives and/or Christians become aware of it and object. Then it's "empowering".

"are starting to wonder where all the good men have gone."

And a guy who doesn't want those things is going to be pretty crappy husband/father material.

Foxie, isn't it amazing that people trying to defend us from this scourge are under the most attack?

What's that line, something about if you're drawing fire you might be over the target?

Misery loves company, and there's pride in not wanting to admit you made a mistake... especially if it was a horrible one... and "sex sells" is so obvious that it hardly needs to be said.

Saying something is wrong is going to make the folks doing it feel bad. Especially if they agree.

"available, plentiful and immediately gratifying to their needs."

Not like this is new, Puddleglum did a rather epic smash against such rot for CS Lewis back when my mom was little.

Needed to be said-- so even then, they knew the tactic, and knew it needed a counter:

“One word, Ma'am," he said, coming back from the fire; limping, because of the pain. "One word. All you've been saying is quite right, I shouldn't wonder. I'm a chap who always liked to know the worst and then put the best face I can on it. So I won't deny any of what you said. But there's one more thing to be said, even so. Suppose we have only dreamed, or made up, all those things-trees and grass and sun and moon and stars and Aslan himself. Suppose we have. Then all I can say is that, in that case, the made-up things seem a good deal more important than the real ones. Suppose this black pit of a kingdom of yours is the only world. Well, it strikes me as a pretty poor one. And that's a funny thing, when you come to think of it. We're just babies making up a game, if you're right. But four babies playing a game can make a play-world which licks your real world hollow. That's why I'm going to stand by the play world. I'm on Aslan's side even if there isn't any Aslan to lead it. I'm going to live as like a Narnian as I can even if there isn't any Narnia. So, thanking you kindly for our supper, if these two gentlemen and the young lady are ready, we're leaving your court at once and setting out in the dark to spend our lives looking for Overland. Not that our lives will be very long, I should think; but that's a small loss if the world's as dull a place as you say.”

Don't forget that the libertines (i.e. the sexual perverts who invented feminism as a means to convince women to each willingly aspire to be "the village bicycle") have *also* spent the past century and more teaching boys and young men that "The Big O" is all they really want, or need.

FWIW, I group that into the "user a-hole" category.

With apologies to useful body parts.

Gaslighting is evil because it teaches folks to look for the wrong thing-- and when it doesn't work, they usually look for more.