Pondering the whacking of Soleimani, I've finally settled on the conundrum that hits me the most: What in the world were the Iranians thinking?

6 weeks ago, there were nationwide riots in Iran which required the army to suppress, at the cost of 1500 lives. More than 700 banks and 100 government offices were burned.


Across the Middle East, Iran and it's proxies are engaged in one conflict after another. What were they thinking taking a swipe at America? At some point, you get overstretched and can't handle all the trouble you've caused. If my country was having violent protests in the streets, I'd be concerned that I had already hit that point. I'd be looking for a way to offload some problems so I could concentrate on what mattered. Instead, they struck again.

The only thing I can think is that they were accustomed to Obama and the Ivy League muffinheads prattling on about the Religion of Peace, diversity and multiculturalism. They weren't ready for The Donald. Wretchard put it very well.

The way Soleimani strutted around, taking selfies, publicly threatening death yet encased in the invisible magic shield of invulnerability clearly conveys what he thought of American politicians. He was the mirror of the actual policy.
— wretchardthecat (@wretchardthecat) January 4, 2020


Iran used to have the advantage of keeping its strategic intentions secret while the US was conventionally expected to proclaim its limits in advance. What's interesting is that for the first time Iran has no idea what American limits are.
— wretchardthecat (@wretchardthecat) January 4, 2020


When our kids get angry at someone and think about lashing out, I like to tell them that you can choose to start a fight, but the other side gets a say in when it ends. That was my initial thought when I heard we'd offed the Iranian general, but then I realized that the maxim goes the other way as well.

Iran can start a fight with America, but America gets a say in how far it goes. We can go a heck of a lot farther than they can. 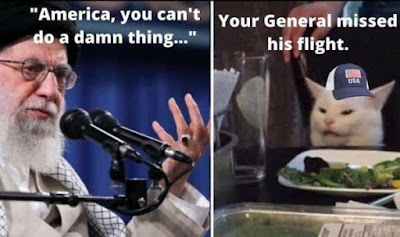 All I can guess is that the elderly thugs in their command structure thought that the old "death to America" standard would work to unite folks.

The Iranian theocracy has considered itself at war with us since at least 1979. Meanwhile, *our* "leaders" have spend the past 40+ years pretending otherwise -- after all, it's only some of their subjects getting killed now and again, not themselves.