So Where's The Inflation?

A few posts ago, Tim asked the logical question, "With all this printing of money, where is the inflation?" After noodling around on the Interweb Tubes for a bit, I found a consensus among the non-foaming-at-the-mouth commentators that gives us two reasons for the lack of inflation.

When all those loans went pfft! and when the stock market crashed, money simply evaporated. Loans were written down and portfolio values shrank. Money that had existed at one time was no longer there. Much of the printing has gone to refill banks' reserves so we didn't end up with bank runs. A good explanation of this phenomena can be found here.

The lack of economic activity has slowed the velocity of money

It's not how much money is in the system, it's how much money times how fast it changes hands. One of the, err, advantages of Obama's economic policies is that no one knows just what in tarnation the government is going to do next. Whatever it is, it's not going to be good, whether it's Dean's high speed choo choos or insane EPA regulations or ObamaCare's monstrous regulations or Dodd-Frank turning the banks into swamps of pointless government paperwork. No one wants to engage in economic activity. The evidence is here: 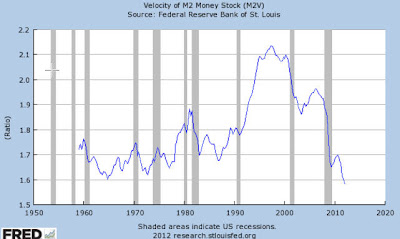 All of that printed money is just sitting there right now. If it's inert, then it can't be chasing goods and services and so it can't be contributing to inflation. A good explanation of this can be found here.

Err, well, yes, we're saved for now. As soon as a grown up gets back into the White House and beats back the hordes of regulatory cannibals running wild in the streets of DC, we'll see economic activity pick up. If we're still printing money like crazy, we're going to be in for one wild ride.
Posted by K T Cat at 6:15 AM

Thanks for looking into this, KT.

The velocity of money graph is particularly interesting. One thing that strikes me, aside from how low it is now, is just how *high* it was from 1990-2010. We seem to be pretty close to the mid-1960s level right now.

Anonymous said...
This comment has been removed by the author.
7:07 AM

Our government just circumvented the first law of thermodynamics to stave off inflation.

this will not end well.

So, no earlier than 2017, then? I'm afraid that Romney isn't showing much sign of having any more gumption to do what needs to be done than Obama.

Actually, by an interesting coincidence, I've been predicting[1] that the economic wreckage would be cleared away and things would start moving again about 8-9 years after the crash. That would be - about 2017

[1] Based on the times it took to recover when the stock market bottomed out previously, in 1933 and 1974

Yeah, Romney is really disappointing, but at least he knows how wealth is created. The guy is so frustrating. He could be a cross between Milton Friedman and Jack Welch, but instead he's just a greasy weasel. Still, Juan Peron Obama is a guaranteed catastrophic failure, so the choice, as bad as it is, seems relatively straightforward.

In both 1933 and 1974 artifical government interventions into the market stiffled recovery. It was not the market that took years it was government regulations that needed to be recovered from.

KT your information begs the question if Obama's "Blame Bush" strategy is designed for after he leaves office to make economic analysis of his failed policies sound like "blame Bush revenge." We know taxes are going up, inflation is coming and spending will have to be slashed.

DDE, my personal journey on this blog has led me to not worry about the politics as much as the culture. In the end, this only changes when personal responsibility becomes the norm.

If you borrow, you're going to have to repay. If you want goodies, you have to earn them. After that, blaming a president is secondary to looking in the mirror and blaming the person who looks back at you.