Fascism Isn't Just For The Feds, You Know


A handful of local officials in California who say the housing bust is a public blight on their cities may invoke their eminent-domain powers to restructure mortgages as a way to help some borrowers who owe more than their homes are worth.

Eminent domain allows a government to forcibly acquire property that is then reused in a way considered good for the public—new housing, roads, shopping centers and the like. Owners of the properties are entitled to compensation, which is usually determined by a court.

But instead of tearing down property, California's San Bernardino County and two of its largest cities, Ontario and Fontana, want to put eminent domain to a highly unorthodox use to keep people in their homes.

The municipalities, about 45 minutes east of Los Angeles, would acquire underwater mortgages from investors and cut the loan principal to match the current property value. Then, they would resell the reduced mortgages to new investors.

Well, why not? We want it to happen, so let's make it happen. Here's how it works. 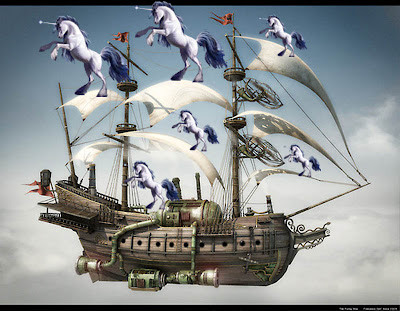 It all seems so logical. Like unicorns riding steampunk ariships.
Posted by K T Cat at 9:06 AM