To A Central Banker, Everything Looks Like An Interest Rate

The Fed is befuddled by the lack of economic growth. After all, they've done what they were supposed to do, they kept interest rates low and poured hundreds of billions of dollars into the Federal Government so they could spend, spend, spend. Now that it's been a clear failure, they're scratching their heads and concluding that they have to simply keep at it for the foreseeable future.

Federal Reserve Chairman Ben S. Bernanke said the “frustratingly slow” U.S. recovery warrants sustained monetary stimulus while predicting that growth will gain speed in the second half of the year.

“The economy is still producing at levels well below its potential; consequently, accommodative monetary policies are still needed,” Bernanke said yesterday in a speech in Atlanta. At the same time, the Fed “will take whatever actions are necessary to keep inflation well controlled,” he said.

They have the tiniest glimmer of thought that there might be something more than just interest rates at work here.

The chairman also said the Fed needs to do “more thinking” about how new rules requiring banks to hold more liquidity will affect the broader financial system, and that the central bank wants to create new regulations that won’t “unnecessarily constrict credit.”

But in the end, they all want to fall back on what they know - printing money and setting interest rates.

Policy makers have few options left to respond to accumulating signs of a slowdown after their second round of asset purchases sparked the harshest political backlash against the central bank in three decades.

“We’ve gotten inconsistency, hesitancy and unevenness” in U.S. economic growth, Atlanta Fed President Dennis Lockhart said yesterday in a speech in Charlotte, North Carolina. “I’m troubled by what you might describe as a lack of conviction in this economy.”

Meanwhile, in states like California, the regulatory jihad continues unchecked.

Farming has long been a field dominated by California, yet environmentalist pressures for cutbacks in agricultural water supplies have turned a quarter million acres of prime Central Valley farmland fallow, creating mass unemployment in many communities.

“California cannot have it both ways, a desire for economic growth yet still overregulating in the areas of labor, water, environment,” notes Dennis Donahue, a Democrat and mayor of Salinas, a large agricultural community south of San Jose. Himself a grower, Donahue sees agricultural in California being undermined by ever-tightening regulations, which have led some to expand their operations to other sections of the country, Mexico and even further afield.

It's not just California, either, and it cuts across political lines. 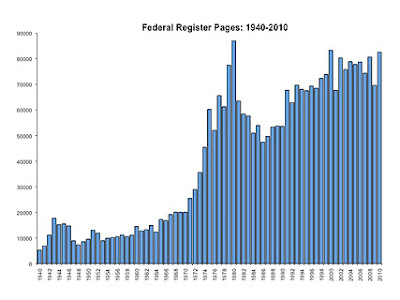 Number of pages in the Federal Register, a crude measure of the growing regulatory burden on the country. Image taken from The Percolator, the free-market environmentalism blog.
Every time I hear Ben Bernanke or even an outside economist like Nouriel Roubini speak about interest rates and quantitative easing, it's like they live in some distant, academic world. You can have all the money you want available to you, but if the rules for using it are hopelessly complicated or punitive, who's going to do anything but sit on their hands?
Posted by K T Cat at 5:47 AM

Are we really supposed to believe there will not be a QE3? The stock market has become a combination of a bubble and a Ponzi scheme fueled by the fed and cheap dollars. When it begins to crash, Obama will demand a new infusion of fed money. Remember, the election is near.

MMFH, I agree. I could see QE3 starting a few months before the election.