... can come from the editorial pages. Dig this.

The political system post-1974 was all about granting all sorts of favors to political cronies, ultimately at the expense of healthy entrepreneurship and private initiative. Now the system is bankrupt and it can no longer offer protection to its acolytes.

Young people can chose between two paths: one is the path of violence, of denial and nihilism. The other path is to turn indignation into a movement whose objective is to get rid of the inept politicians and the hypocritical academics who purport to be fighting for the well-being of public institutions.

Such a movement of indignation would aspire to transcend blanket negativity and violence. But such a movement requires a certain element of risk and positive action, not just loud protest.

If we want jobs for our young people, if we want to keep the brightest and most talented of them in the country, then we ought to encourage them to express those characteristics that have made Greeks distinguish themselves in the past: the ability to sniff out an opportunity, extroversion, business acumen, the ability to think outside the box -- all those traits, in other words, that have enabled Greeks to excel away from home, in environments that are free from graft, corruption and the false protection of a bankrupt state and political system. 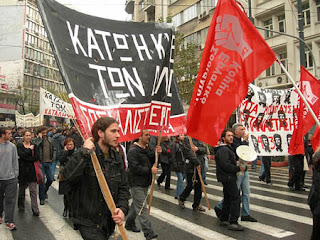 That was well-put but I don't see those youngsters in Greece anywhere close to embracing what that guy was talking about.

Hey, at least someone over there is talking about this stuff. You can't tell how widespread this sentiment is, either.