... may mean acceding to their demands.

Here at home, I cook about half our meals. Maybe a shade more than that as my wife spends a few nights a week taking care of others at Hospice or our church. It's my job to feed the troops and I'm facing a palace revolution.

My preferred cuisine is Southern and my preferred method is experimental. Last night, I made blackened catfish (good!), cornbread (good!) and mixed greens with tasso (bad!). This was not just an isolated foray into culinary territory unfamiliar to the youthful savages in our house, it was one of a steady stream of them. One of our sons has taken to asking who is cooking that night before deciding whether to come home for dinner.

It looks as if the Arab Spring has come to San Diego. Our own Street Arabs are gathering in the market square, waving their arms and chanting for regime change. As the local dictator, I'm being forced to acquiesce to their demands. It's going to be harder than it looks. 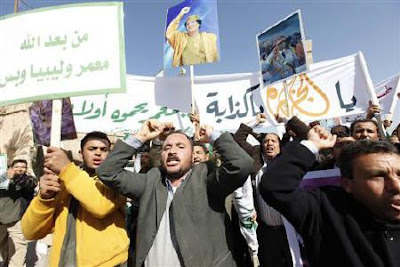 A scene from our dining room.
We have four children. Here are their gustatory limitations.

Each of them, taken individually, cuts out a substantial number of recipes. Taken en toto, even assuming you find some substitute meal for Child B, eliminates about 80% of all recipes. (No onions? Impossible!)

Add to that the fact that some of my favorite recipes that fit all of these restrictions, Cuban Pecadillo, Chicken Country Captain and Moroccan Chicken with Olives have been banned for various reasons, I'm left with ... grilling sausages every night? Simply dreadful for the experimental cook. I had considered forays into Greek and Indian cuisine, but the rioters outside the kitchen would surely burn the place down and lynch the kitchen staff in short order should I do that.

Heaven help me, but I may be forced to open the Betty Crocker cookbook and work my way through it's bland and boring recipes, one at a time. Sigh. It's like Van Gogh having to give up the canvas and paint bathrooms instead.

Suggestions are welcome.
Posted by K T Cat at 12:06 PM

Ah, but perhaps you can take a card from my gut response to most local revolutionaries!

My folks started a thing where one day a week, each kid did dinner. Figure out what to make, add to the shopping list if the stuff isn't already there (sticky notes to claim stuff for this week's dinner are very useful) and make the dinner.

Suggested ground rule, learning from experience:
"No, you can't make the same thing every week."
(Spaghetti, in my sister's case. For my brother, it was "no, ramen noodles are NOT dinner," and in mine, they hid the "cajun" seasoning bottle and hinted that we weren't having a legion over.)

Not sure how old said kids are, but good luck anyways!

Great suggestion! The kids are old enough to cook and it would be good for all of us if they prepared a meal a week.

My folks added an angle that the kid who turned old enough to drive on their own did the grocery shopping, too-- set up a debit account with something like $300, budget things out, keep the receipts so you can figure out what's taking such a big bite out of the budget, etc.

Of course, that worked smoothly for us because we're only a bit over a year apart, too.

Foxfier: that's what I was going to suggest, too! "If you don't like the food, you cook it, and *I'll* complain about it."

And, once they leave home and have to start cooking for themselves, they'll (maybe grudgingly) thank you for it.

Unfortunately, I can't do it that way myself quite yet, because a 5-year-old can't really work safely around knives or a hot stove (and a 3-year-old probably shouldn't even be in the kitchen), although they are both pretty eager to help me measure out ingredients whenever possible.

One thing that helps on the pickiness front, though, is to feed them things that are assembled from parts, and make them mix it up themselves ("OK, here's the noodles, and here's the sauce. If you don't like the sauce, you can eat the noodles plain"). That might help with the ones that object to particular ingredients.

Of course, then there's my parent's solution: Heavy physical labor on the farm to work up an appetite really cuts down on kids being picky about their food.

My folks solved the dinner problem without much stress on their part. The solution was quite simple as far as they were concerned.

We had two choices at each meal:

1. Eat what mom had cooked.

*laughs* I should hope so!

What Whittlin Man said. My wife spoils our kids; I'm more of the "eat or starve" parent.

I grew up with a big German family with access to real German butchers. I learned to love the strangest things, though I think I'm probably over the chicken heart soup.

Oh yeah -- your kids are definitely of the "do it yourself" age. Between Boy Scout trips and at home, I was doing lots of planning and cooking at that age.