My compadre and I finished the Abide sign I'd shared a while back. It's now gone to the printer to be made into an 8' x 4' sign. I really like the way it looks. It was a real act of collaboration. My friend is an accomplished artist, but he was kind enough to follow my lead. We had a good time doing it, too.

To recap, it's for a Catholic men's retreat weekend. The retreat leader chose John 15:9 as his theme. He loves the beach and the water. The last image is mine, a waterfall in Alabama. My artist friend coached me on getting the geometry within the images to blend and it worked well once we chose pictures from Adobe Stock that had similar internal structures and color levels. In the previous version, we had planned to use a black background, but we both worried about how evenly the printer would spray the ink on a massive sign, so we went with white instead.

I left the image large, so it's worth a click. Enjoy! 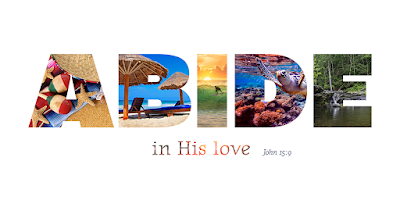