In the case of the parents vs. the school boards, the answer is the school boards. The most dramatic case of a parent going ballistic at their school board comes from Loudoun Country, Virginia. The Daily Wire got the scoop on what happened while the MSM stayed in their plush studios, content to trot out the Party's talking points about divisiveness, hate and violence.

On June 22, Scott Smith was arrested at a Loudoun County, Virginia, school board meeting, a meeting that was ultimately deemed an “unlawful assembly” after many attendees vocally opposed a policy on transgender students.

What people did not know is that weeks prior on May 28, Smith says, a boy allegedly wearing a skirt entered a girls’ bathroom at nearby Stone Bridge High School, where he sexually assaulted Smith’s ninth-grade daughter.

It gets worse, much worse. The school system tried to hide the information from the cops by dragging their feet on the investigation and they transferred the boy to another school where he attacked another girl. The dad was enraged that his daughter had been raped and the school system lied to cover it up and protect the pervert.

One can safely assume that three years earlier, dad was pretty much the same guy. I don't recall news reports of school-board screaming matches all across the country back then. Something did indeed change, but it couldn't have been the parents. Instead, it was the education industry, which has gone completely mad by the embracing sexual degeneracy of the gender-confusion movement and the racism of CRT.

They're also down with tyranny. Dig this. 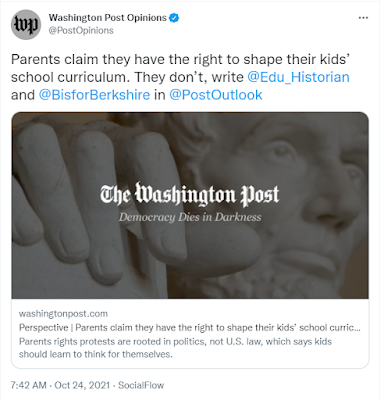 The message is clear: we can teach your kids anything we want and you aren't allowed to object to it. Your children belong to the State.

Breaking: In the wake of yesterday's @FreeBeacon report, National School Board Association announces "we regret and apologize for the letter" to Biden admin characterizing concerned parents as potentially domestic terrorists pic.twitter.com/3RBufvWqAN

In any case, it's the school boards that are the aggressors, not the parents. These parents have been there for years and years, dutifully taking their kids to school and doing what the education industry said. To get to the point that they're going to school board meetings, of all things, and losing their minds means the education industry has pushed things way too far.

Your statement “Your children belong to the State.” Is exactly how and what they think. It is of a piece with the comment Kelly made a few days ago that “The land belongs to the states,”. Although I must concede that Kelly did add “the people do not.”

It is the same line of reasoning that enables people to think it is OK for the government to tax and tax and tax, to invoke mandates about what people must have put in their bodies, when they can and can’t get together (even if they can sing when they are together), and all the other things the left is shoving down the throats of the populace.

Sadly our failure to recall Newsom suggests that the number of sheeple who will tolerate just about anything if makes them ‘safe’ (even though much of that is perception and not reality).

"it was suburban moms who gave Trump his well-deserved thrashing."

I don't get that. Someone who seventy plus million votes got thrashed? Specially so when you take into account the electoral shenanigans that went on.
'Well deserved?' Totally undeserved I would say and would have at the time never mind after nine months of the numbskulls in charge now, if you can use such a dignified expression like 'in charge' to describe the litany of disastrous decisions they have made.

I seem to vaguely remember organizations in this country getting in trouble for covering up sexual scandals involving children. What do you bet this one continues to get swept under the rug?

The Garage Logic theory for the way elections are going, is that the new elected official (mostly talking about the Mayors of Minneapolis and St Paul, but it applies in most of the 21st century politics) will make you look back longing for the previous office holder. This has held absolute for more that 20 years in both cities. Both of which have had ironclad rule of the left. Democrats in this state lose when they aren't viewed as radical enough. Since I've been able to vote, it almost holds for President. Only W following Billy breaks the mold. I'd say Trump was an improvement over Obama in many things, but taken as a whole, his megalomania was a net negative for the country.