It's Not A State, It's A Prison

Three counties in Maryland want to leave their state and join West Virginia. They're the westernmost three, in the spur of Maryland right above West Virginia. The people are cultural brothers of the Mountaineers, practically unrelated to the coastal Marylanders in places like Baltimore whose population allow them to rule everyone in the state. 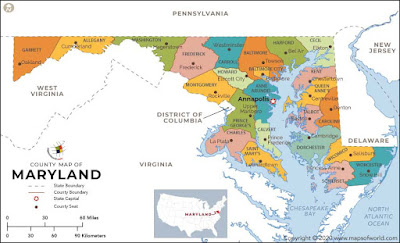 When son kitteh and I went to Baton Rouge a few weeks ago, it was his first trip to Dixie. One of the things that struck him was how different the South is from California. For him, it was like another country. He immediately grasped the concept of Federalism. What makes the people of San Diego think they know best for those on the bayou?

If the people of Garrett, Allegany and Washington counties want out, why not let them go? What is it that you are preserving? Stephanie Smith, a Baltimore Democrat in the General Assembly, said on Twitter, "Congratulating my colleagues on this attention-seeking effort! But remember, viral relevance is but a vapor. You'll still be a Maryland resident after the re-tweets subside & the side eyes will be abundant."

That's the sneer of the warden, not the remarks of a friend. The replies in her feed and those in other tweets about the counties wanting to join WV were full of hatred for the pigs who live in both western Maryland and West Virginia. Still, they didn't want to let the counties get away.

Like the five counties in Oregon that want to join Idaho, the state is holding on to people of a different culture who want out because they lack the population necessary to have a say in their government. Since the government controls more and more aspects of their lives, it's not just having a say in government, it's not being able to live free from alien tyranny.

Combine that with the destabilizing effects of our crushing debt and you get the ingredients for real conflict.

Those people are free to move to the other state. The land belongs to the states, the people do not. The states aren't just going to give away land on a whim.

Actually, the land belongs to the people that own it. If the owners of the land want to be part of a different state, why keep them there?

Gotta agree with KT here. I haven't had a county, state, or federal election that I voted in go the way I wanted in more than 20 years. And people really aren't free to move, they have jobs they have to go to. And those jobs aren't available everywhere.

I do have the luxury of now working at a fully remote job. And we are thinking of moving out of the Minneapolis/St Paul 7 county area.

The government is there to govern. That has devolved into ruling by a single party. I get the news letters from state representative in my district and the next one over They are seemingly nice people, but their goals do not align with mine, and they do align with the radicals who have taken over this state.

We could move to a slightly more politically sane state. But they have a delusion with green and yellow (that they call gold). :-)

Funny story, my Dad worked for Heileman's when I was born. That's why I was born in La Crosse instead of Hudson (where they lived before I was born, and we moved back for a time).

I am currently able to sneak across the border and get some of their best under the cover of darkness. :-) New Glarus Spotted cow. Leinenkugel also quite good for a regular, brat boiling brew.

Back in grad school (a.k.a. when we were poor), Mrs Ohioan and I bought a six pack of Pabst Extra Light (PEL). As we started to drink them we both said “that’s awful”. Decided to use them to boil brats (and not drink them). Used two to boil the brats. HORRIBLE! Completely inedible. Threw out the brats and the two unopened PEL’s. That was the day we decided that life was too short to drink cheap (bad) beer. Turns that San Diego is home to bunch of craft beers. Karl Strauss Red Trolley is our current favorite (except when the Karl Strauss Oatmeal Stout is available).

Ohioan, you can believe what you want, but a civil war was fought in this country over land. People may think they own it, but the government can and has taken it from the people who thought they owned it. Ask the descendants of the Californios.

Very true. This is about power. Losing 3 counties would probably affect the number of seats in congress and money from the feds to the state. They will never let it go. Just like California will never break up into multiple states.