Today was a bit damp, so I drove to various spots in southern Alabama to take stock and take photos. Photos first.

I mentioned previously that in the South, the vegetation is particularly predatory. I've got a few examples of human structures that are being consumed even as you read this. 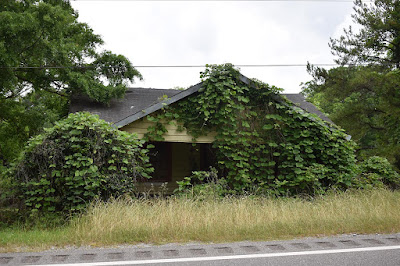 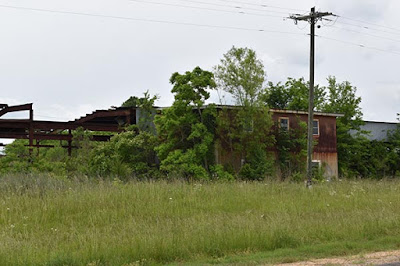 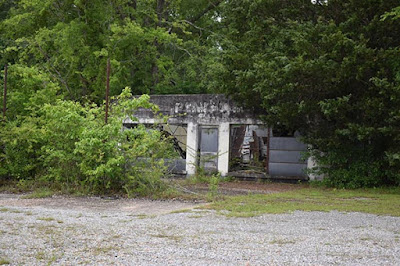 There are a couple of places in Alabama that are a 2 on the Bortle Scale. That is, they are almost as dark at night as the middle of the ocean and are therefore excellent for photographing the Milky Way. It's going to be overcast while I'm here, so I won't have a chance to shoot the stars, but I did drive to those spots to check them out.

That was the kind of bigotry that had me sneering at the South up to about 15 years ago. When I realized what I had done, I was bit surprised that my biases had stuck with me even after becoming a Dixiephile.

There's nothing like getting out into the real world to dispel misconceptions.

Yes, I can see where, with all the talk about how "farms are disappearing", you might have gotten the idea that a lot of the country was returning to wilderness or something. The thing is, there is just as much farmland under cultivation as there ever was, and agricultural productivity is increasing. It's just owned by fewer, bigger farming operations. When the farmers have equipment that lets one or two operators till, plant, and harvest hundreds of acres in a day, there is a huge incentive for the farms to be massive so that the capacity of the machines doesn't go to waste.

I got to watch the transition to big farms happening around us in the 70s. Our farm was 180 acres with 50 head of dairy cattle, and we were clearly at the very bottom edge of the minimum viable size. Other dairy farms were expanding to have two to five times as many cattle, and the crop farms were rapidly expanding their operations to run thousands of acres. Our neighbors across the street were farming something like 3000 acres, and when we hired them to harvest, say, a 40 acre wheat field, their monster combine could polish it off in about an hour.

Smaller farms that were paid off were able to struggle along for a while, but any who were in debt got progressively further behind every year and ended up having to sell to the big guys. The people who were doing OK with moderate amounts of acreage were the ones who owned their land outright, and then instead of farming it themselves they rented it out to the big operators. My parents eventually sold our farm for considerably more than they paid for it, but Dad said that he made money off of it as a land speculation. He said the income from farming it was only on the order of 1-2% return on investment. And it would only be worse now. Back in the late 70s, we were getting paid about $13 per hundred pounds of milk (roughly a dollar a gallon). It's still only about $17 per hundred pounds now, but if the price had actually been keeping up with inflation, it would have been $42 per hundred pounds by now. Agriculture is very much a "go big or go home" proposition.

So the land is being cultivated and cared for, and the farms dominate the rural US as much as they ever did. It's just the people who are leaving for places where they haven't been replaced by machines yet.

It is possible to have a small farm and make a go of it, but only if it is a specialty farm growing a premium product that people will pay extra for. But this only works when you can sell nearly direct to the customer. And that means that such farms do best if they are within easy driving distance of a city with a lot of wealthy people with expensive tastes in food. And even that type of farm typically is run as a second job, with the owner getting most of their income from their main job.