Macro first. Thanks to Tim's suggestions about using my new 105mm howitzer macro lens on the Nikon Artillery Piece, I ventured away from the auto setting and tried my hand at aperture priority with manual focus. Scary! I sat in my garden with the camera on a tripod and shot bees. 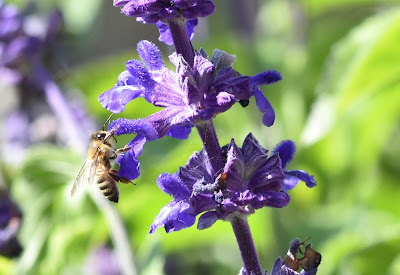 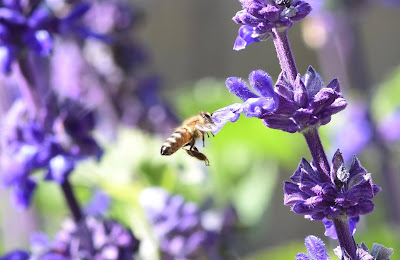 I learned quite a bit. The first thing I learned was that the tripod was terrible for this sort of thing. The handle poked me in the chest and my legs and feet kept colliding with its legs and feet. It was like I was doing the rumba and it was doing the waltz. Not good. I bought a monopod and hope to try it out today.

I learned a bit about focusing and aperture as well. One cool trick I learned was how to take tunnel shots. That is, the bee would be deep in the plants and when I focused on him, it blurred out the surrounding "tunnel" of foliage. Very cool! I didn't manage to get any good pictures of that, but it gave me ideas for the future.

I finished my center console yesterday and installed it. The car started up immediately, despite the battery having sat there for months. It was great! I drove the car down the street and the clutch started going all the way to the floor without resistance. Shifting became nearly impossible. I got it into second and limped back home.

The cause was the most MGB failure I've ever had. When you pushed down the clutch, fluid shot out of the filler cap. Amazing! I didn't realize they could do that. At first, I thought a hole had been accidentally poked in the filler cap, but when I examined it more thoroughly, I discovered that there is indeed a pinhole in the cap, probably to allow for pressure relief. The line is so clogged that all of the fluid that's supposed to go down to the clutch slave cylinder is instead escaping through the tiny hole in the cap. Hence the jet of Dot 3.

Today, we'll tear the master cylinder apart and see what's wrong with it.

KT's Theory Of Everything, Madness Edition

“Anti-Asian racism has the same source as anti-Black racism: White supremacy,” Ms. Ho wrote for The Conversation. “So when a Black person attacks an Asian person, the encounter is fueled perhaps by racism, but very specifically by White supremacy. White supremacy does not require a White person to perpetuate it.”

Ms. Ho isn't an idiot, it's just that she's been driven insane trying to carry out her assigned task of squaring the circle of racial justice. Here are her boundary conditions.

It's not possible to satisfy them all, but she's trying to do it. That's enough to drive anyone crazy. She's not evil, she's just one of those people that struggles with seeing that a task is impossible.

Poor Ms. Ho is trapped in a system that can only produce madness. I don't feel scorn, but pity. We all have our weaknesses and difficulty noticing that her social justice mission can't be done is hers.

I hate to argue with you but... well let’s check our terms.
Idiot: a person of low intelligence. Intelligence: a person or being with the ability to acquire and apply knowledge.

I've got an idea for a future post, perhaps tomorrow, that will at least partially excuse her behavior. I'm trying to be less judgmental and more understanding. Mostly failing, but trying.

Good job on the macro photography. I think you will find the next hurdle to be light management. Shooting in sunlight allows fast shutter speeds but causes harsh shadows, while dimmer light reduces the shadow problem but now causes trouble with slow shutter speeds.


I think the most charitable interpretation of what Prof. Ho is saying, follows from something that Lyndon Johnson said:

"If you can convince the lowest white man he's better than the best colored man, he won't notice you're picking his pocket. Hell, give him somebody to look down on, and he'll empty his pockets for you."

I think she's taking it a step beyond that, with the colored man looking down on the asians as a salve on his hurt feelings about being looked down on by white men.

Note I am not saying that this is *true*, only that it is a not completely irrational thing to think.

Haven't finished this yet, but I have to get you on the right path for the MG.

1) The wife got a new hummingbird feeder out front, in front of my office window. So I get a hummingbird every day. I have no talent for photography, so spending any amount of money on cameras for me, is a terrible waste of money. But I'd like to get a nice picture of the hummingbird.

2) Undoubtably the problem with your clutch is the clutch hose at the slave cylinder. It has undoubtably failed internally and is blocking.

Think back when you last replaced the brakes and clutch hoses? I'm at about 18 years. It may be time for me. Last time, I got the stainless wrapped ones off ebay.

Thanks for the tip on the MGB, but it's too late. I tore out the clutch master cylinder yesterday which, of course, meant tearing out the metal frame for it as well as the brake master cylinder. I've ordered replacements for it and the hose because the metal hose is totally frozen to the master cylinder. I can't get it off for love nor money.

I guess, in the end, I'm doing what you suggested, but because it's frozen to the master cylinder, I had to replace that thing anyway.

Also, the use of the term "master cylinder" is racist. But then you knew that.

Well, if your fitting is frozen to the master cylinder, it's time to replace the whole thing anyway. Are you getting a slave cylinder too?

I remember back in college, I spent a couple weeks trying to rebuild a bodged brake master cylinder. After a couple rebuild kits, and who knows how many pints of DOT 4, I finally just bought a new one. It was amazing having real brakes again.


I apologize for the charged term.

I'm pretty sure my slave cylinder is brand new. I'll check it out today or tomorrow.

As for DOT 4 or DOT 5, I've heard that DOT 5 is the way to go. My cans of DOT 3 go into the hazardous waste trash today.

DOT 4 and DOT 5 are incompatible.

If you want to change from one to the other, you need to clean out everything. I believe with alcohol.

DOT 3, 4, and 5.1 are polyethylene glycol based. DOT 5 is silicone based. DOT 5s issue is that it doesn't mix with water. Which means, if/when water gets in the system, it will collect together and find the lowest point in the pipe. And that's where rust starts.

Interestingly, DOT 5.1 probably should have been called 4.1, but it was developed after DOT 5.

Roger that. Thanks for the tip.